Well, we've survived our first week of Radiothon for 2014, and while we didn't reach our two week show goal today, we still did okay.  If you were one of the fifteen folks who made a pledge to WHUS today during Bluegrass Cafe...THANKS!!  If you didn't yet make a pledge, we sure hope you'll think about doing it next Sunday afternoon!

Of all of the wonderful recordings and other delightful premiums we had to offer as thank you gifts today, by far, our most popular was "Side By Side" -- the new Rebel recording from Ralph Stanley & Ralph Stanley II.  Fabulous!  It sure is a great thing to know that Ralph Stanley and his music still appeal to so many people.

Our playlist for the show today was drawn from the wonderful recordings we have available as thank you gifts.  Big thanks to these record labels for their fabulous contributions to our fundraising efforts:  Mountain Fever Records, Mountain Home, Mountain Roads Recordings, Patuxent Music, Rebel Records, and Rural Rhythm.

Next Sunday, we'll see how many folks can join in and voice their support for Bluegrass music on the air at WHUS.  Hope you can be one of 'em!

Posted by Bluegrass Cafe at 11:25 PM No comments: 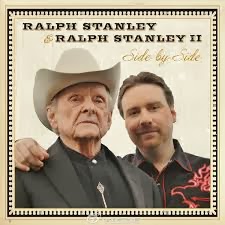 In case you've not heard by now, our annual fundraising campaign at WHUS -- known as Radiothon -- began today and will run until Sunday, March 2nd.  This year's Radiothon is happening about 4 weeks earlier than it normally does at WHUS, but we're hopeful that our wonderful listeners will still be able to help us out and support our radio efforts once again this year...

As always, we have some fabulous ways to say THANKS to you for your pledges of support.  There is a good selection of WHUS apparel, including a purple t-shirt for $35 and a heather gray hooded full-zip sweatshirt for $50.  If you'd like to see the design for this year's apparel, you should be able to view them by clicking here. 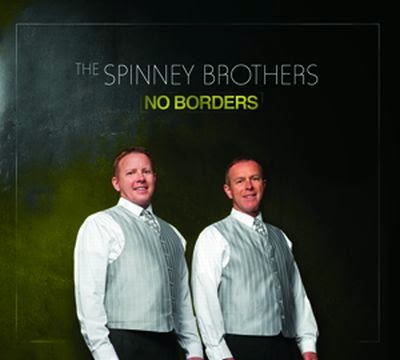 We know that folks who generally pledge to Bluegrass Cafe like their thank you gift to be a musical one, and that's a good option for you this year, too.  [Update 3/1/2014:  Several additional titles have been added to our giveaway list, courtesy of the fine folks at Crossroads Music.  Check out the new titles below, as they are bold and printed in RED].  Among the titles we have to offer you this year for a $35 pledge: 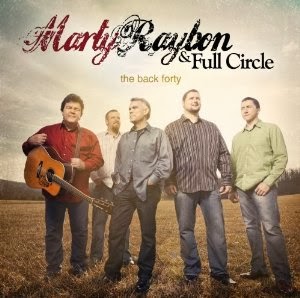 This list of available premiums is not 100% complete, so please tune in to the show to hear what other CDs we have available. 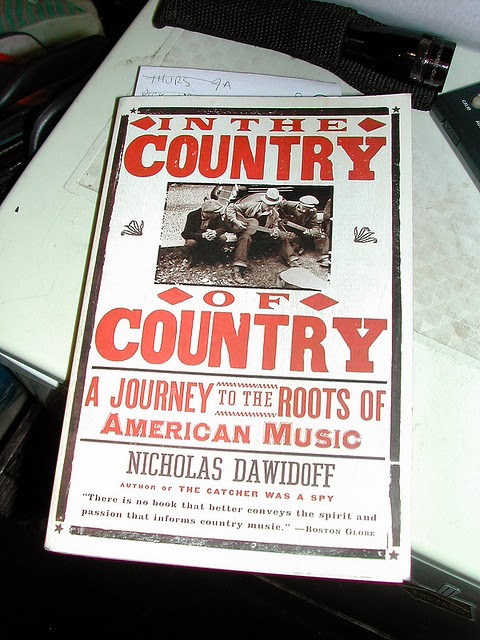 As we've done over the past few years, we'll have a "bonus" book drawing after our second week of Radiothon ends on March 2nd.  For each person who pledges to the show during the two weeks of Radiothon -- with a pledge of any amount -- his/her name will go into a drawing to be held at the conclusion of the show on March 2nd for a great book called In The Country Of Country:  A Journey Into The Roots Of American Music by Nicholas Dawidoff.  While this book is not brand new (it was published in 1997), and the subject isn't specifically Bluegrass, it is a wonderful book in which the author visited the hometowns of several country music and Bluegrass legends, including Bill Monroe, Earl Scruggs, and Doc Watson.

We sure hope you'll consider supporting our fundraising efforts at WHUS this year.  Jot down this number, and give us a call on Sunday -- 1-800-599-9487.  Operators will be standing (or, more accurately) sitting by, just waiting patiently for you!  THANKS!!!

Posted by Bluegrass Cafe at 11:51 PM No comments:

I was supposed to be out of the country this weekend on business, but my plans changed at the very last minute.  This allowed me not only to attend the excellent Joe Val Festival, but to take my turn at Bluegrass Cafe and save Amy from having to cut Joe Val short and fill-in for me. 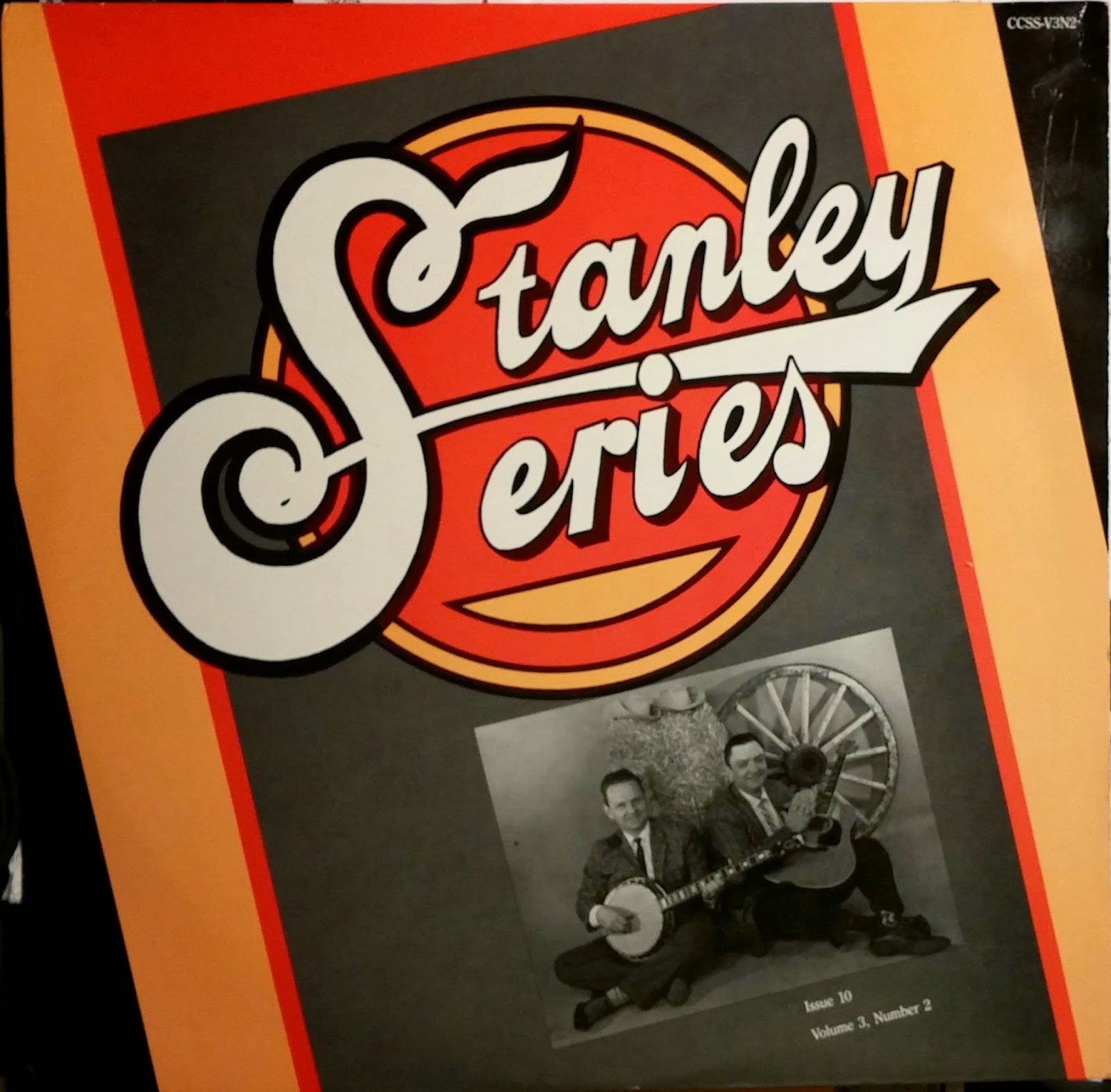 There were several mini-features on this show including a tribute to two of the outstanding brother duos in bluegrass today, The Gibson Brothers and The Spinney Brothers.  We played a song or two from the older catalog as well as songs from the most recent recordings. 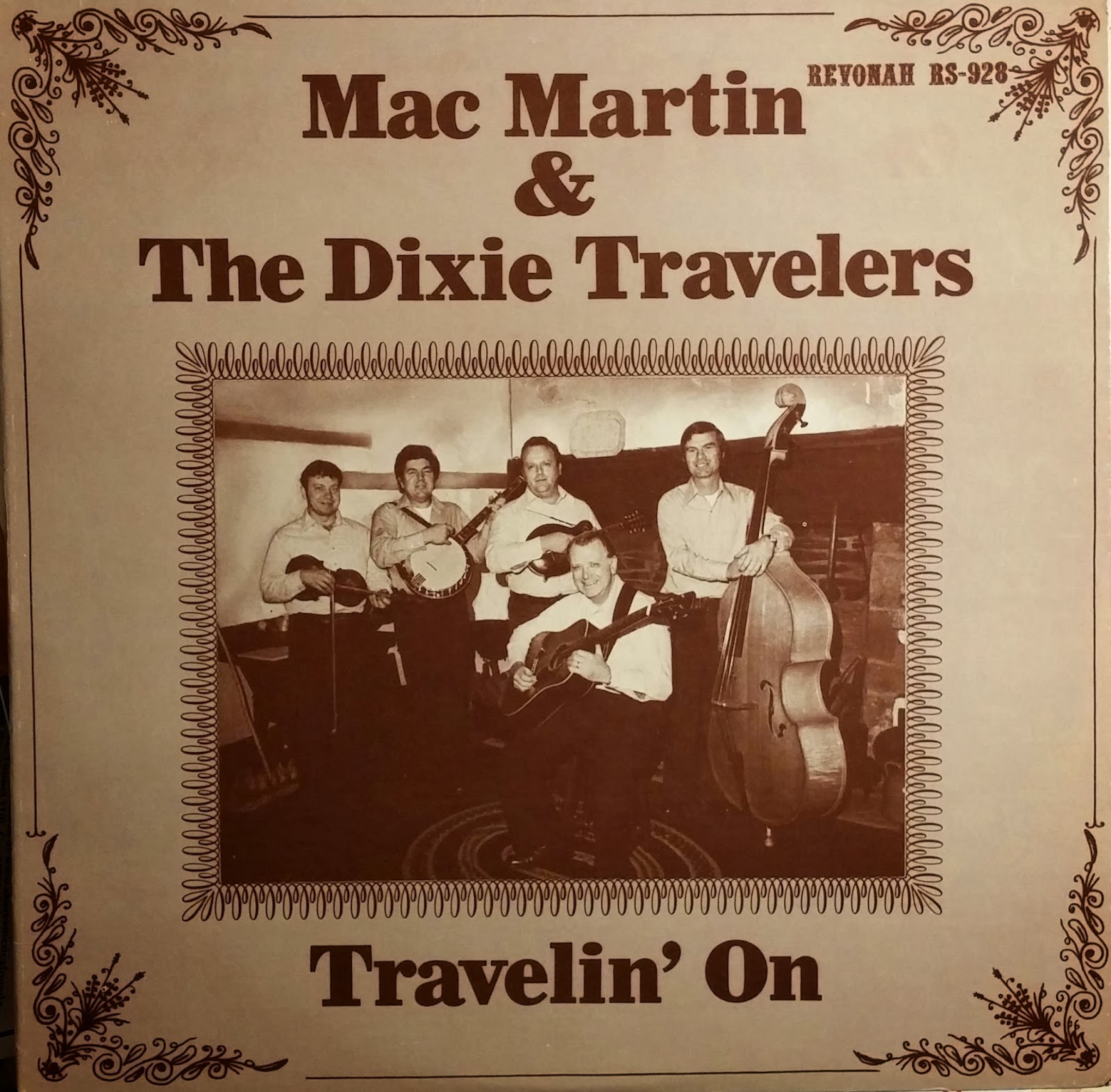 We also were delighted to play a track from each of seven recent CD reissues of complete Rural Rhythm albums from their 1960s catalog.  The artists included J.E. Mainer, Lee Moore, Red Smiley, Curly Fox, Hylo Brown, and Jim Greer.

Classic and relatively rare vinyl is a favorite on Bluegrass Cafe, and the Heritage Corner provided part of a live performance of The Stanley Brothers at the Ash Grove in 1962, tracks from LPs of Mac Martin and The Potomac Valley Boys capped by a 45 single from Hubert Davis and The Season Travelers.  Other Heritage Corner selections came from The Johnson Mountain Boys, 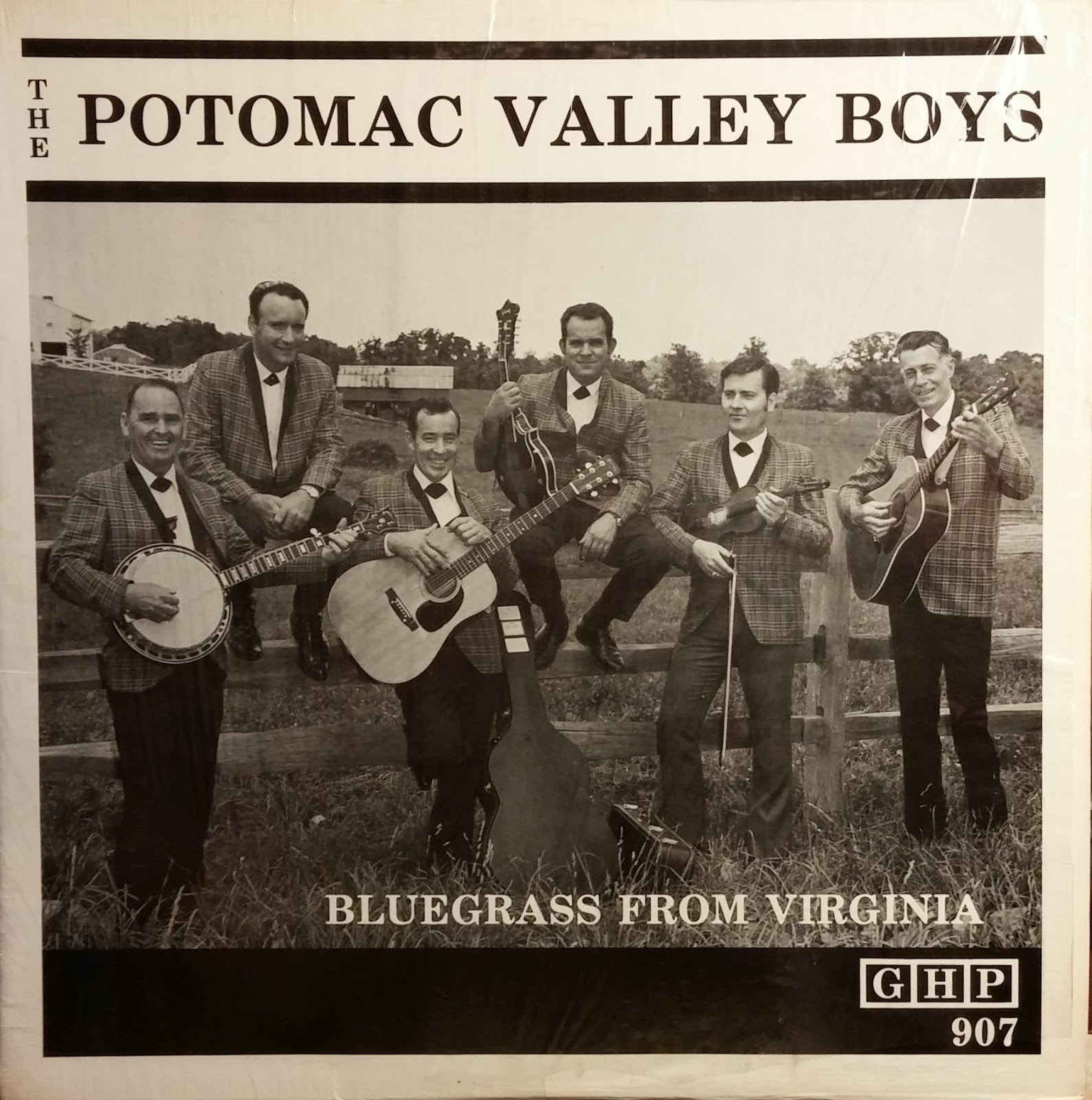 I own the majority of recordings of Delia Bell and Bill Grant and brought some of them out of the Heritage Corner archives to play several of their songs throughout the show. 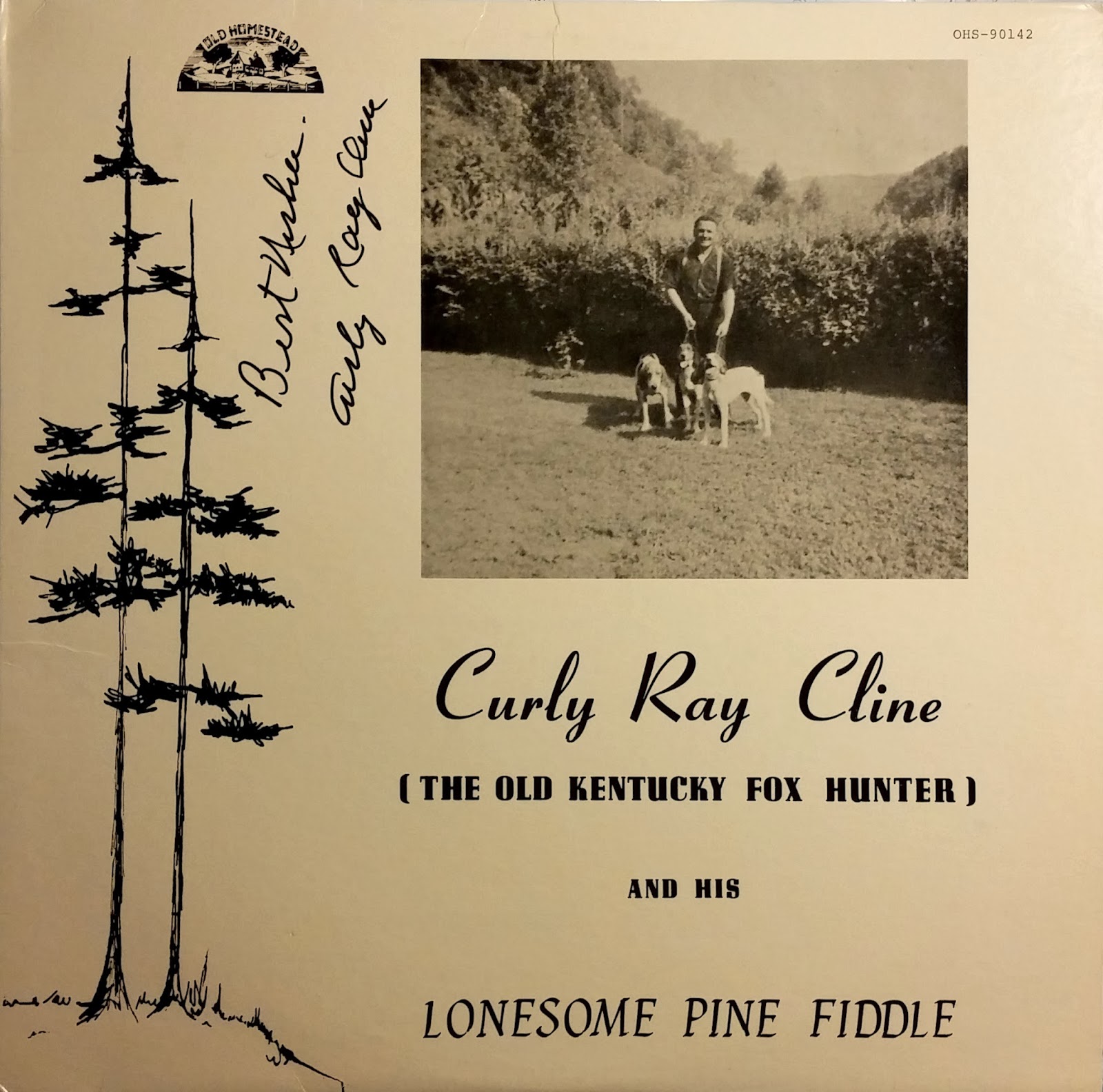 WHUS Radiothon will start next Saturday and Bluegrass Cafe will be involved the next two Sundays, Feb. 23 and Mar.2.  Radiothon is the only time of the year when both Amy and I will be in the studio at the same time, and we are usually joined by James & Cathy Ward, my wife Marti who also co-hosts Red Rooster Party with me, and many of our friends and family on the phones.  We hope you will consider joining us for Radiothon.  You never know what is going to happen!

On Sunday's show, we celebrated two notable musical anniversaries, as well as played a few songs for a February holiday that happens this coming Friday...

First, the musical anniversaries.  Unless you've been away from all media for the last several months, you're likely quite aware that it was fifty years ago -- specifically, on Sunday, February 9, 1964 -- that the Beatles made their American television debut on "The Ed Sullivan Show," and the world of rock and roll music was set on its ear.  Truth to be told, the Beatles were THE band to impact so many of today's musicians and fans of great music, and while the Beatles clearly were not Bluegrass performers, they sure impacted a whole bunch of Bluegrass musicians.  It's hard to imagine a "little" band comprised of four working class lads from Great Britain could cause such a big stir, but they sure did, didn't they?  To mark the 50 year anniversary of their Sullivan show appearance, we put together a set featuring Bluegrass covers of several Beatles tunes, including three selections from the classic 1966 "Beatle Country" recording by the Charles River Valley Boys.

The second musical anniversary came more as on-the-fly programming.  While checking the show's Facebook page (www.facebook.com/WHUS.BluegrassCafe), I came across another post by New York broadcaster Bill Knowlton, who had observed that February 9th would also be the 100th birthday of the Texas Troubadour, Ernest Tubb.  Now, Ernest Tubb was definitely not a Bluegrass performer, but again, several of his songs have been covered in the Bluegrass world.  In fact, several years ago, the Osborne Brothers recorded an entire album in tribute to E.T., so we chose two songs from that project ("The Ernest Tubb Song Folio" on Pinecastle Records), as well as covers of two other Tubb songs by the Johnson Mountain Boys and IIIrd Tyme Out.
As Valentine's Day comes up this week, it seemed appropriate to play a few positive Bluegrass love songs.  Those were provided by several different performers, including the Lynn Morris Band, Traver Hollow, the Spinney Brothers, Lost & Found, Reno & Smiley, Tony Holt & the Wildwood Valley Boys, and Paul Adkins & the Borderline Band, among others. 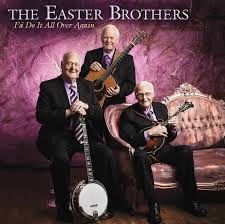 And, of course, we made room in the show to play a bit of newer music, as well, particularly from 2014 recordings released by Rhonda Vincent, the Easter Brothers, Blue Highway, Frank Wakefield & Taylor Baker, and Ralph Stanley with Ralph Stanley II.  Great stuff!

Hope you have a great week, and we'll look for you at the Joe Val Bluegrass Festival in Framingham, MA this coming weekend.  If you're going to be at the festival, stop by the Showcase Stage area to hear some great upcoming regional bands...and perhaps you can say hey to me, too...

Join me next Sunday, too, won't you?

REQUESTS ARE RED.
Posted by Bluegrass Cafe at 11:23 PM No comments: 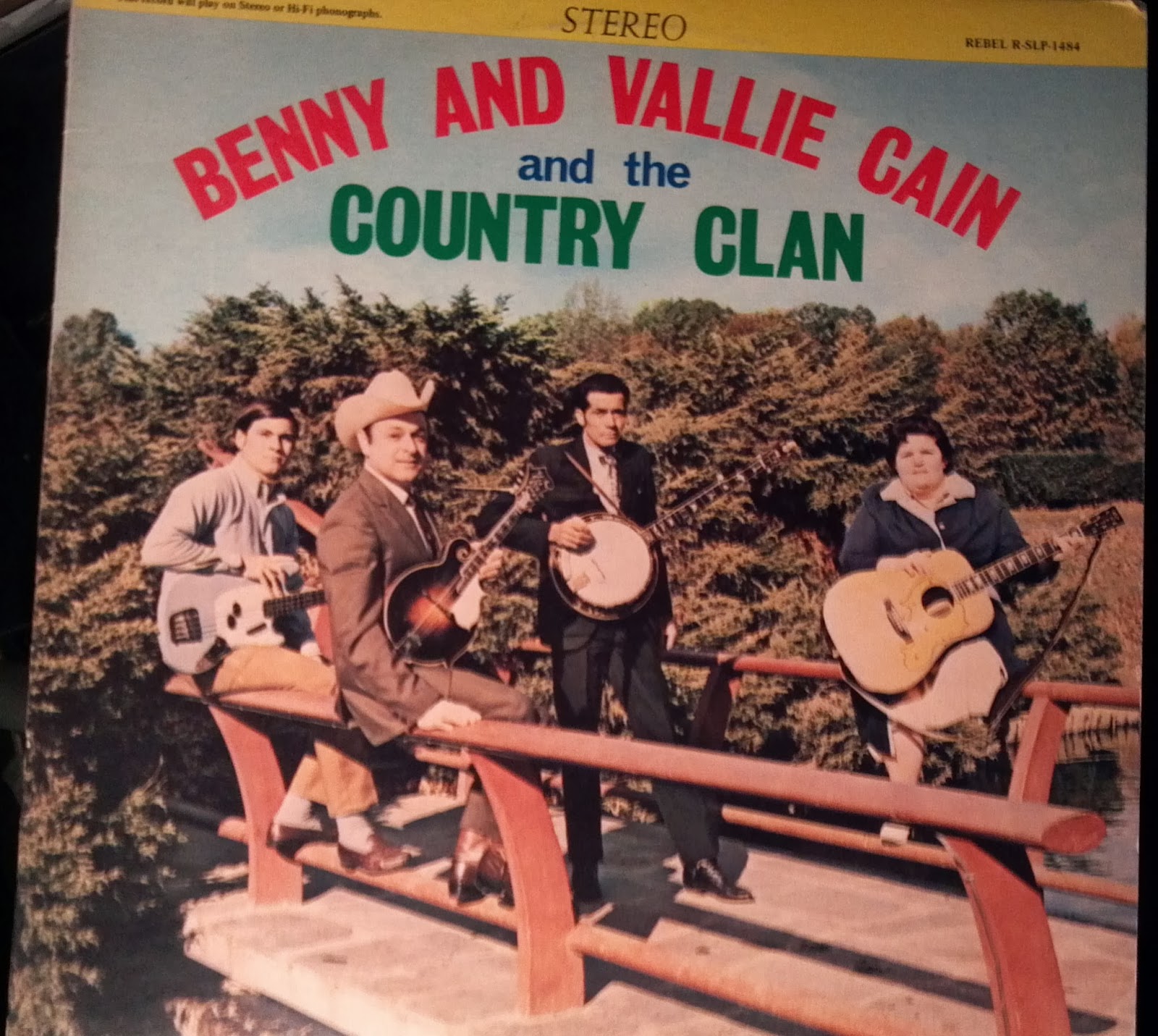 This was the first show of the WHUS spring calendar, and we focused on much lesser-heard classic bluegrass.

The Johnson Mountain Boys were a bit of a focus, but we also heard from the Flatt Mountain Boys, Charlie Moore & Bill Napier, James King, The Country Gentlemen, The Gillis Brothers, Bennie And Vallie Cain, and a bunch of 45s I hauled to the studio including the flip sides of two Jack Cooke singles, both sides of the Arthur Smith single of "Feudin' Banjos," a little Mac Martin, and some Jimmie Williams & Red Ellis. 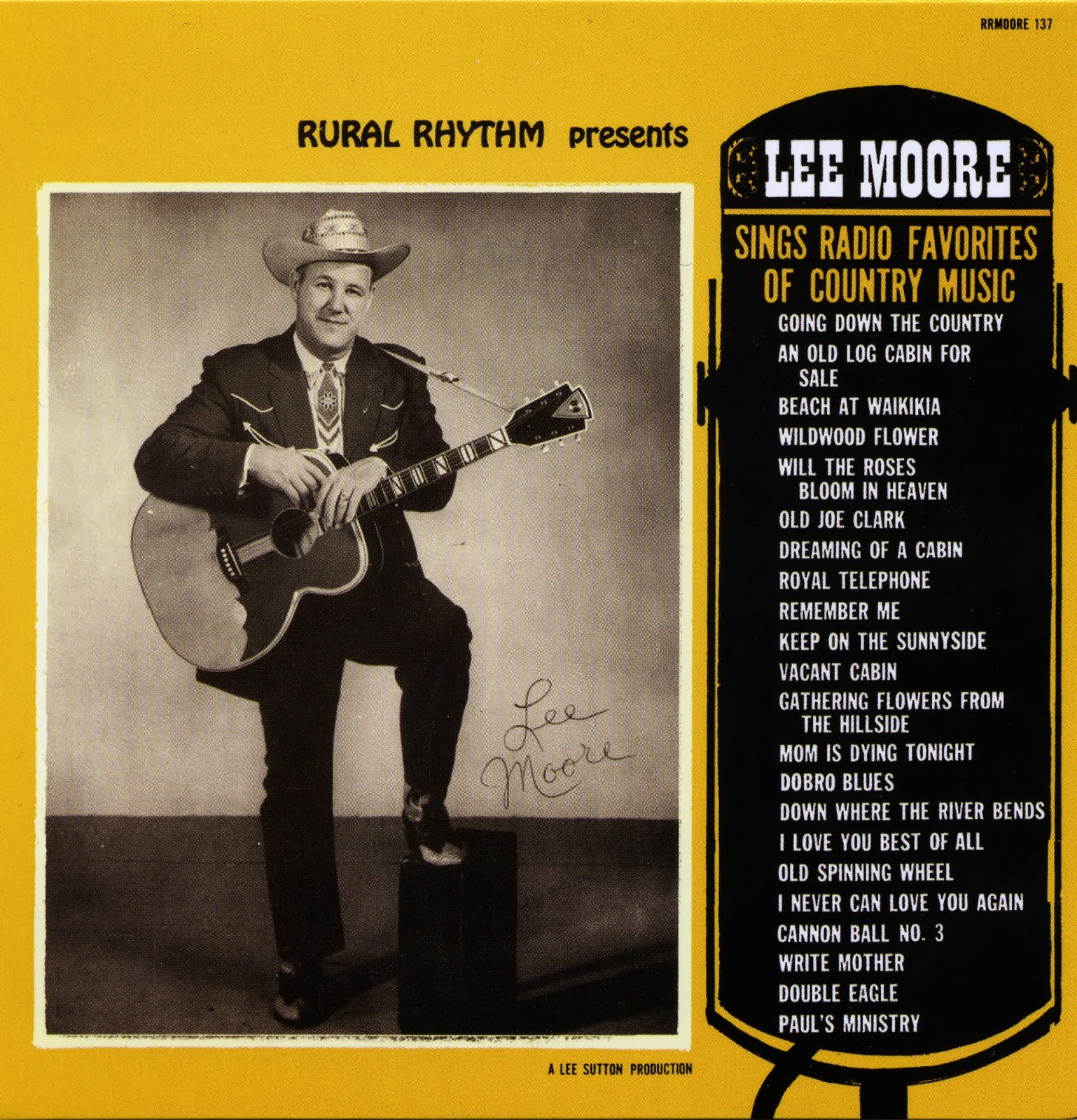 We also featured at least a track from four classic albums that have been released on CD for the first time by Rural Rhythm.  Artists included Red Smiley, Curly Fox, Lee Moore, and Hylo Brown.  We are eager to get even more of these gems on the air as they are released. 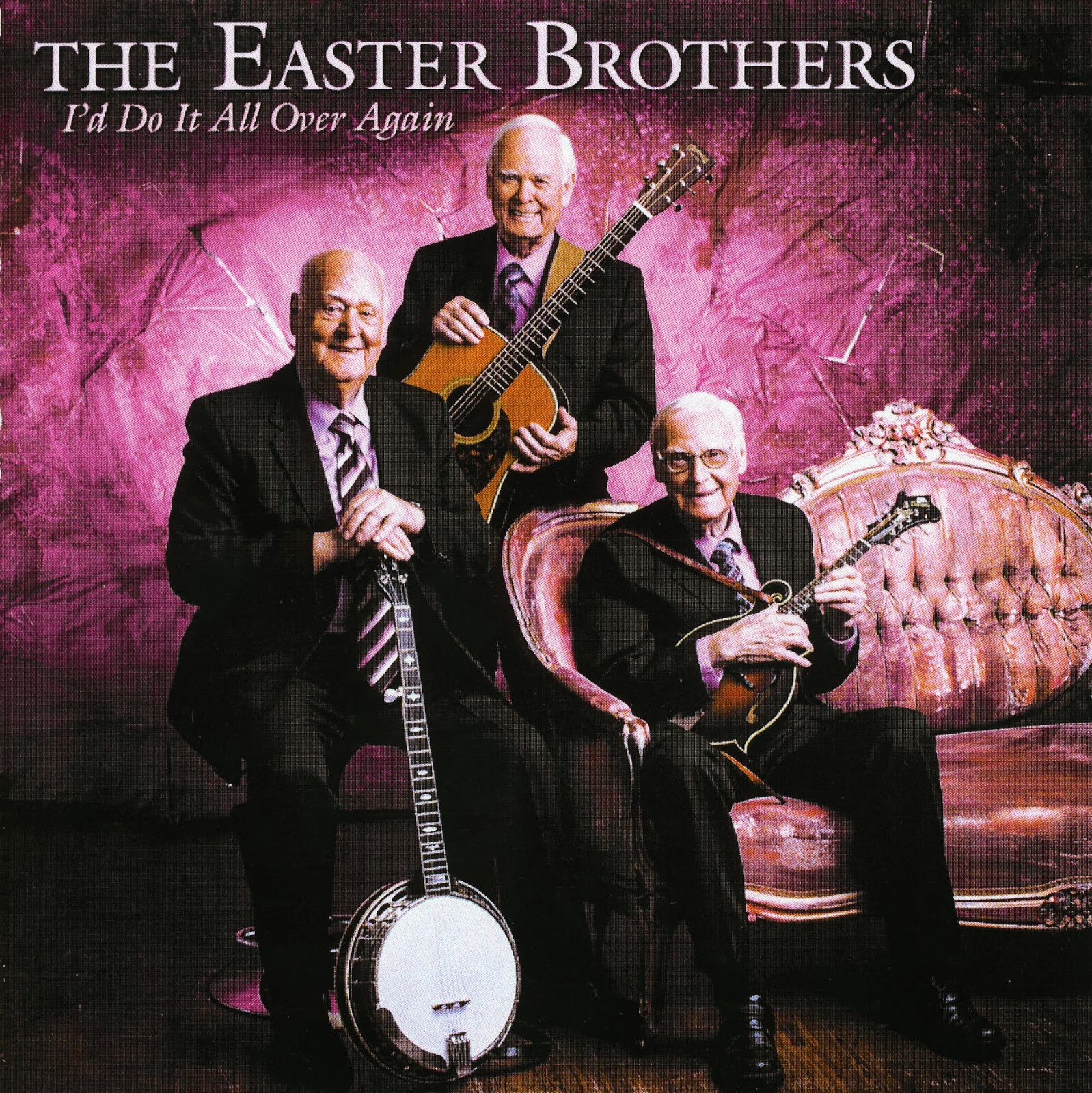 Current music included the #1 single and album from The Spinney Brothers, Larry Efaw and the Bluegrass Mountaineers, Alex Leach, Sammy Adkins, Don Rigsby, Newton & Thomas, The Roys, Jack Lawrence, Noam Pikelny, Little Roy & Lizzy, and new music from The Easter Brothers.  We played another song from the Rhonda Vincent CD that accompanies author Nancy B. Brewer's book, "The House With The Red Light." 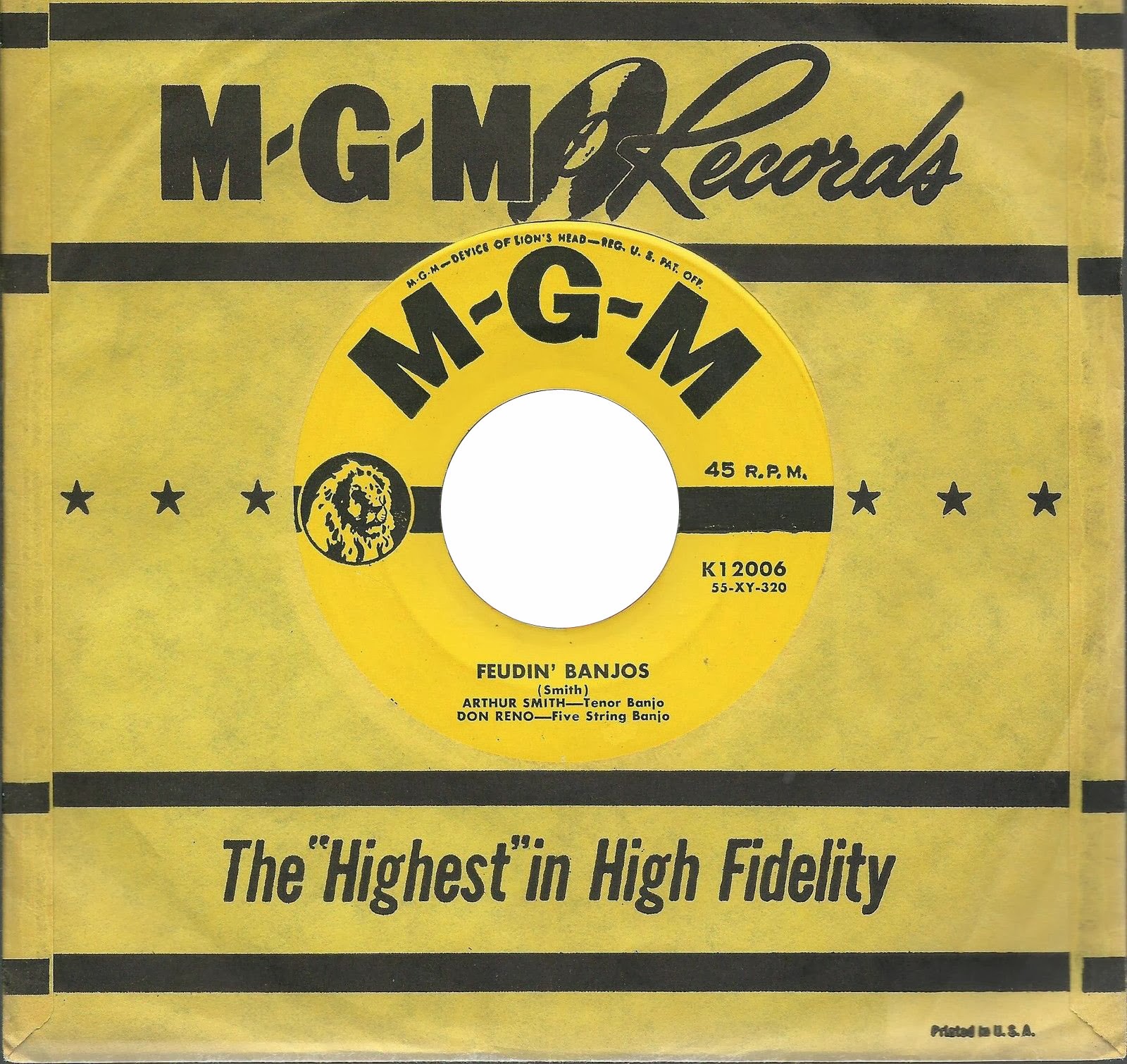 Of course The Dillards gave us an ode to the ground hog which described what we would like to do with him after that lousy forecast earlier in the day.

Amy will be back next week for another 3-hour show, so be sure to tune in to hear the banjos and fiddles ring!

Posted by Jim Beaver at 9:32 PM No comments: