For the Memorial Day show I was able to find about two hours of material from my personal library that related directly or indirectly to honoring fallen soldiers. Much of the material was classic which fit well with my Heritage Corner, but there was some great new material as well.

The show was nearly four hours long because of some extra programming time prior to the schedule change for the summer, and that allowed some new material to air in addition to the Memorial Day tribute songs.

There were many songs that qualified for the Heritage Corner including material from The Lilly Brothers & Don Stover, Carl Sauceman & his Green Valley Boys, The Louvin Brothers, Charlie Monroe, J. E. Mainer's Mountaineers (recorded in Concord NC, my hometown, in 1963), Don Reno & Red Smiley, and Red Allen. 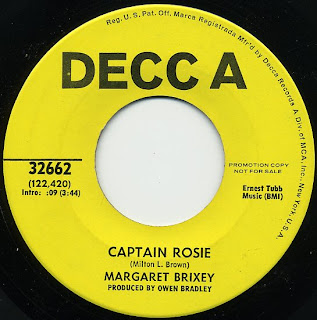 A special Heritage Corner segment was a song appropriate to Memorial Day by Margaret Brixey titled "Captain Rosie". Moosup resident Archie Kneeland tipped me off a few years ago about this song, and because Marti and I had played it on our other show at the time -- Red Rooster Party, it found its way onto our on-line playlist. Margaret Brixey found that web site and corresponded with us. The following is from her notes and with her permission:

I recorded this song when I was 16 at the famous Bradley's Barn Recording Studio in Mt. Joliet, Tennessee. Ernest Tubb found the song for me for my first Decca session and Owen Bradley, my producer approved it. My Mom and I cried when we listened to the demo for the first time.

While having my website (www.ndnbabies.com) worked on, I happened onto yours. I was happy to see that someone was still playing that song, because I always liked it. Thank you for sharing it with your listeners.

After I asked some more questions, she sent this reply:

If you look on my website, ...on the Artist page, there is a website referrenced. It is down at the bottom of the page near the third picture of me. ( Tulsa TV Memories.) There is supposed to be a link there. It gives you the story of how I came to record for Decca Records in Nashville.


I do still sing today. I will always love to sing. However, I am now caring for my 86 year- old Father.... I want him to be happy in his last years and intend to see that he is. So, I do not get out much these days.

"Captain Rosie" was recorded in January of 1970 . I turned 16 in November of '69. It was the "B" side of "Before Charlie Gets Home" by Bill Anderson. But it received equal air play in some markets. Which is kinda unusual. It was sent out to radio stations by Decca Records in the same envelope with Conway Twitty's "Hello Darlin' ".

I was ready to quit singing as a career by the time I was 18. I wanted to be happily married and to have kids. I had 6 children. When the youngest one was 14 my 28 year marriage ended, so I started singing again here locally. It helped me over the hump, and I met my fiance, who is a jazz pianist from New York. Don LOVES Country music and has given me an appreciation for alot of good ole standards and some Jazz.

Great to hear from you!

I'll be doing some of the MC work down at the Strawberry Park Bluegrass Festival in Preston, CT between Thursday and Sunday, so be sure to say "hi" if you are there.

Be sure to tune in next Sunday at 4pm ET when Amy will make the banjos and fiddles ring, but without the extra hour.

We are once again in a between-the-semesters mode at WHUS. For us, this means a "bonus" hour of Bluegrass Cafe for a week or two, as we've been coming on the air at 3PM. We'll do it at least once more next Sunday (5/24), so be sure to tune in to Jim & Marti good and early.

So, in our "bonus" hour yesterday, I thought it might be fun to play a few classic country tunes, and then, find a BG equivalent. It's not surprising to pick up a new recording from a BG performer and find that he or she has chosen to record an old country song from the 1940s, 1950s, 1960s, 1970s, or even the 1980s or later. Sometimes, that's a good thing. Really, we could fill up at least 3 or 4 hours with country songs and BG remakes (or vice versa, in some cases), but we limited ourselves to just one hour yesterday. I enjoyed it quite a bit, I must confess...

The remainder of the "normal" three hours was spent playing lots and lots of great Bluegrass, new and not-so-new. Among yesterday's brand-new was the fine Rural Rhythm debut for the newly-renamed Russell Moore & IIIrd Tyme Out. Russell's voice is as strong as ever, and it's pretty easy to hear why he's received two IBMA Awards for "Male Vocalist of the Year." Check out this band at the Podunk Bluegrass Festival on August 1st, and be sure to keep listening to BG Cafe, as I'm certain you'll hear lots more from this fine CD in future weeks.

Also included in Sunday's show were tunes from a couple of newer CDs released by Patuxent Music. Both of these CDs feature young talent -- the future of BG, perhaps? The Doerfels are a talented family band who've played at Maine's Thomas Point Beach Bluegrass Festival, as well as lots of other places, and Angelica Grim is a 19-year-old Californian with a big voice and a fine new CD.

Jim & Marti join you next Sunday starting off at 3PM. Have yourselves a safe and happy Memorial Day weekend, and be sure to take a moment to remember a veteran.


Posted by Bluegrass Cafe at 12:44 PM No comments:

This show fell on Mother's Day, so that was the theme. I figured there would be plenty of mother songs to choose from, but was actually surprised at just how many there are. Mothers are a popular bluegrass topic. Judging from your calls, it was popular with the Bluegrass Cafe audience as well.

Amongst the mother songs, several artists have new music that debuted on this show including Alecia Nugent; Patsy, Donna & Roni Stoneman; and Nathan Stanley & Ralph Stanley. 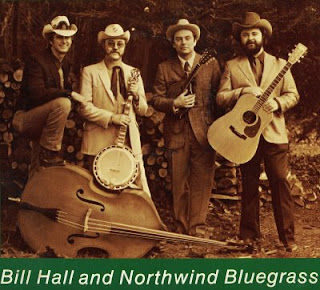 I suppose a third feature was my own mother describing her childhood ride in a mule-drawn wagon to Midland, NC, where her family got to hear Charlie & Bill Monroe perform in the two-room schoolhouse. Her mother (my grandmother) loved "What Would You Give In Exchange," so we followed my mom with that song.

Amy will make the banjos and fiddles ring next Sunday, so tune in.

requests are in blue

Posted by Jim Beaver at 1:09 AM No comments: 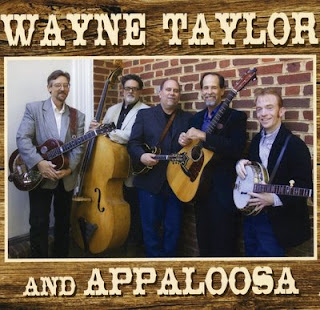 There was excitement in the studio Sunday because we had the good fortune to have Wayne Taylor of Wayne Taylor and Appaloosa on the air with us live by telephone. Wayne has assembled a super band following his retirement from the US Navy where he was leader of the Navy's bluegrass unit, The Country Current. We featured a few songs from Wayne's new CD as well as a couple from an earlier Wayne Taylor collaboration with Bill Emerson. When you see Wayne, you must ask him about the time he performed for Bill Monroe.

With history in mind, we bookended Frank Wakefield's career (so far) by playing one of his oldest (from vinyl) and newest recorded instrumentals. It is amazing how consistent his tone is across 56 years.

Anne & Pete Sibley have a local concert in the area this coming Friday, so we played a fine song from one of their recent CDs.

There was another cause to celebrate Sunday as James and Cathy Ward programmed their last one-hour segment of the show as trainees (their selections are in blue below). They did a great job, and we will now wait and see if they decide to pursue their own show. James' and Cathy's selections are indicated on the playlist in blue.

There is an astounding number of quality new releases lately, so I'll be eager to get some more of them on the air next week when Marti and I are back again.

Song Title / Performer / Album Title / Label
Interview with Wayne Taylor of Wayne Taylor and Appaloosa
Posted by Jim Beaver at 12:27 AM No comments: