This time of year, there are generally lots of sports preemptions at WHUS, as the UCONN Basketball teams are usually getting ready for tournament time, and the Baseball team's season is just beginning.  We understand that WHUS is a college radio station, and it stands to reason that the Sports Department is really keen on broadcasting as many games from as many UCONN sports as possible.  We won't lie, though:  preemptions stink.  It would be great if we could have a more consistent programming schedule, but I'm afraid that just isn't going to happen.  So...we'll make this work as best as we can, and we'll keep you as up-to-date on preemptions as we can.  Generally, the best way for you to find out about Bluegrass Cafe being preempted is by checking out our Facebook page.  If you're on Facebook, give our page a "like," and if you're not on Facebook, you can still check out our Facebook page.  Do it by visiting www.facebook.com/WHUS.BluegrassCafe 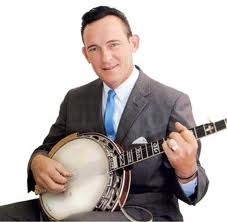 Today's Bluegrass Cafe got a late start (beginning at 4:58PM), as we had to wait for the conclusion of a rain-delayed baseball game that was supposed to finish at 2PM.  We tried to make the most of the time that was left, though -- hope you agree.  Our unofficial "Star of the Day" was the late Don Reno, who would have celebrated his 86th birthday on February 21st.  Not only was Reno an incredibly innovative banjo picker who made some top-notch records with partner Red Smiley (and later, Bill Harrell), but he also is credited with writing more than 450 songs.  A lot of these songs have become Bluegrass standards, and I suppose it would have been quite easy to fill up the whole show with the music performed and/or written by Don Reno, but we limited ourselves to eight selections over the course of the show.

Don Reno isn't the only Bluegrass/banjo legend who celebrates a birthday in February.  The one and only Ralph Stanley turns 86 years old on February 25th, so we couldn't get through the show without playing a couple of Ralph Stanley-penned songs -- one instrumental and two vocals. 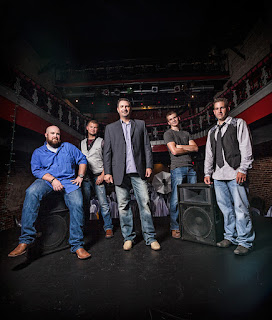 As always, new music made up a large portion of our playlist -- some of it was very new.  The group called Volume Five has a brand new CD on Mountain Fever Records called "Run," and we picked out two of the songs from that fine collection.  Also from Mountain Fever was a song from a forthcoming recording by The Expedition Show called, "Stormy Horizons."  The most unique debut recording this week came from a new band called The Rosenthals, which features former Seldom Scene singer/guitar player, Phil Rosenthal on guitar and banjo, and his son, Daniel, on trumpet.  It's a very different combination, for sure, but it seems to work nicely.  The band made its "debut" last weekend on the Showcase Stage at the Joe Val Bluegrass Festival, and their new recording is called, "Fly Away."  Other newer music on Sunday's show came from Karl Shiflett & Big Country Show, Flatt Lonesome, Alan Bibey & Wayne Benson, Connecticut's Grass Routes, the Spinney Brothers, Nightflyer, Danny Paisley & the Southern Grass, and Ronnie Bowman (from the Rural Rhythm Civil War-themed collection, "God Didn't Choose Sides").

Hope you'll be able to join Jim on the radio next Sunday afternoon from 4-7PM, and don't forget to listen to James & Cathy Ward's "Bluegrass Rules" on Thursdays now:  7-8PM.

SONGS WRITTEN OR CO-WRITTEN BY DON RENO IN RED


Posted by Bluegrass Cafe at 11:59 PM No comments: 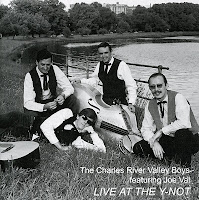 What a great weekend for bluegrass in New England.  This of course was because it was Joe Val Bluegrass Festival weekend.  I drove down from the festival just in time to do this show.  Perhaps you heard it if you had your radio tuned to WHUS as you drove home from the festival.

We led the show with a 1967 live recording from The Charles River Valley Boys -- fitting because the CRVB had just received the Heritage Award at the Joe Val festival, and Joe Val himself was the mandolin picker and lead/tenor singer in the group at the time.  A couple more tracks from that performance made their way into the playlist throughout the show. 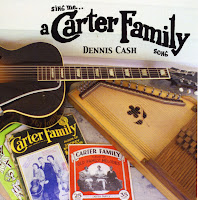 A good number of the artists represented on this show had made appearances at the Joe Val festival, including James King, Grammy award winning Steep Canyon Rangers, Audie Blaylock and Redline, Dale Ann Bradley, the Seldom Scene, and Danny Paisley & The Southern Grass who had played two blistering sets on Saturday. 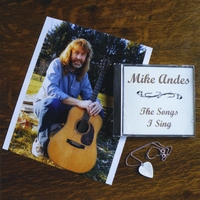 A song from Dennis Cash's new Carter Family tribute CD made its debut on this show as well as a song from the new solo effort from Mike Andes. 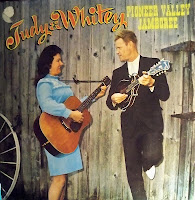 The Heritage Corner had several gems for this show.  One was a rare recording from New England music and television personalities Judy & Whitey -- Judith Ann Reed and  Vernon Carrier -- with Bob French on the banjo and Richie Brown on bass.  Another classic piece was an instrumental from The McCormick Brothers.  We had a gospel number from a mid-60's LP by Carl Story, a track from the Country Gentlemen's first LP, and a 1961 recording from The Lilly Brothers & Don Stover.

Amy will be back next Sunday making the banjos and fiddles ring.  Be sure to tune in.

Here are some photos of bands playing the Joe Val festival this year.  The playlist follows.

On Sunday, the show was reduced to 90 minutes, as there was a UCONN Women's Basketball game on the air until 5:30PM.  The goal for the condensed show remained the same, though:  play a bunch of newer songs, as well as a set showcasing some of the performers to be featured at next weekend's Joe Val Bluegrass Festival in Framingham, MA.  Mission accomplished on both goals, I do believe.

The new music came from some very good new projects from a Kentucky/Virginia-based band called Cumberland Gap Connection, a live recording from the duo of Mike Compton & Joe Newberry, and the recording debut of an exciting young Florida band featuring three siblings, Flatt Lonesome.  We also played a story song from a new Rural Rhythm project about the Civil War:  "God Didn't Choose Sides:  Civil War True Stories About Real People."  No doubt, we'll be hearing lots more from each of these fine projects.  Other performers with newer songs (less than a year old) which made it on to our short Sunday playlist:  Joe Mullins & the Radio Ramblers, Robert Hale, the Spinney Brothers, Ray Edwards (with Keith Pyrtle), and Connecticut band, Grass Routes.

It's a good thing the Blizzard of 2013 happened this past weekend, as the weather reports I've seen said that the Framingham, MA area received upwards of 30+ inches of snow.  Yikes.  Hopefully, the snow will be mostly cleared away by the time the 28th Annual Joe Val Bluegrass Festival takes place from February 15-17 at the Sheraton Framingham.  Hotel rooms have been sold out for a while, but single day tickets are still a possibility.  If you need more information on the festival, please visit the Boston Bluegrass Union's website or call their hotline:  (617)782-2251.  Whether you're Framingham-bound or not, we shared a bit of music from a few of the performers scheduled to play the Main Stage and/or Showcase Stage next weekend, including Audie Blaylock & Redline, Danny Paisley & the Southern Grass, the Seldom Scene, the Bluegrass Gospel Project, Too Blue, and Dale Ann Bradley.  (Incidentally, if you're in the Hamden, CT area this Friday evening - February 15th - you may wish to check out Dale Ann Bradley's show at the Outer Space.  More info on this GuitarTownCT show can be found by clicking here. 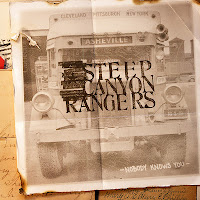 Sunday was the night of the Grammy Awards ceremony and broadcast in Los Angeles.  The Bluegrass Grammy category featured five nominees, and we played music from two of these nominees to kick off the slightly-abbreviated gospel set on Sunday:  Dailey & Vincent (from their Cracker Barrel release, "The Gospel Side Of Dailey & Vincent") and the Special Consensus (their "Scratch Gravel Road" was released by Compass Records).  After the show was over, it was announced that the Bluegrass Grammy winners for 2013 were the Steep Canyon Rangers for their Rounder recording, "Nobody Knows You."  Congratulations to them, and to all of the nominees!  Look for the Steeps playing at Joe Val this Friday night, too!

Hope everyone has a calm, blizzard-less week, and be sure to join Jim next Sunday afternoon for what we hope will be a full three-hour edition of the "Bluegrass Cafe" from 4-7PM.

Posted by Bluegrass Cafe at 11:32 PM No comments: 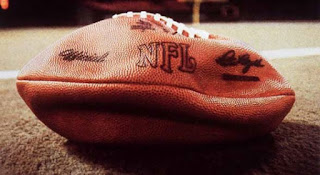 The scuttlebutt around the WHUS Bluegrass Cafe studio was that there was some kind of professional athletic event taking place somewhere far away from New England at the same time this show aired.  With such inspiration, we provided a great program of bluegrass for listeners with the wisdom to know they could listen to our show and get everything they needed to know about that far-flung event online in just minutes after its conclusion. :-)

Highlights included a rock-and-roll-turned-bluegrass set that included songs that saw their first light in blues and rock & roll, but tranlated to bluegrass quite well thanks to master artists Bill Emerson, Cliff Waldron, The Grass Cats, Larry Cordle, and Balsam Range.

We also heard the 2005 Song of the Year from Phil Leadbetter who will be performing with Dale Ann Bradley and Steve Gulley a couple of times in New England this month.

Marty Raybon's new single debuted on this show as well as a couple of tracks from the new CD produced by Nathan Stanley of various artists like Vince Gill, Rebecca Lynn Howard, and Ricky Skaggs performing songs in tribute to living legend Dr. Ralph Stanley.

We heard an early version of Long Black Veil from The Country Gentlemen followed by the new sequel by Akira Otsuka.

Next Sunday's Bluegrass Cafe will either be partially preempted by UCONN sports or possibly a snowstorm if access to the studio is limited, so my best advice is to tune in at 4pm to see what is in store.