Sunday's show featured a good bit of music from the great song stylist, Bill Harrell, who died on June 24th following a stroke earlier in the month. While Bill Harrell's singing style was never really in the "high lonesome" Bill Monroe category of BG music, he certainly had a very long career working with both Don Reno and with his own band, the Virginians, for many years. To pay a small tribute to this very identifiable BG voice, we played several tunes featuring Bill Harrell on Sunday, and will, I'm sure, continue to play his music in future weeks and months of the BG Cafe.

A special guest DJ -- Clyde Proch -- made a return trip behind the microphones at WHUS on Sunday afternoon, too. Clyde is a "regular" on the New England BG circuit, and each year, he attends many, many festivals and shows throughout the region. You may recall that one of the "premiums" we offered for listeners during Radiothon in March was a chance to DJ the show for an hour. Clyde did a fabulous job with this in 2008, as well as this year, so thanks again to him for being a tremendous supporter of the BG in the northeast (and, of course, for being a great listener of the BG Cafe). Clyde's selections are noted in the playlist below in RED.

We left a little bit of time to throw in a tiny bit of new music from great CDs by Dede Wyland ("Keep The Light On" from Patuxent Music), Tim Graves & Cherokee ("Prodigal Son" from C&L Entertainment), and a self-released project from North Carolina's Tommy Edwards ("Heartbroke And Lonesome"). We look forward to hearing more from each of these recordings, as well as tunes from a couple more new CDs we just didn't have time to play on Sunday.

For a bit of summer fun, we gave away a couple of CDs yesterday to two listeners, and we continued our Grey Fox giveaway (one pass for one day each week between now and July 12th). Thanks again to the great Grey Fox promoters for letting us give away passes. If you haven't won a pass or CD yet, don't despair -- Jim will have more giveaways for you next week.

Be sure to tune in to Jim & Marti next Sunday, 7/5. I'm certain that they'll have a great selection of Independence Day-related tunes, and, of course, lots more of the best in BG.

Posted by Bluegrass Cafe at 1:04 PM No comments:

Admission is $5 and all proceeds will be donated to the American Cancer Society's Relay For Life.
Posted by Bluegrass Cafe at 10:37 AM No comments:

It should come as no surprise that a running theme for Sunday's BG Cafe was "fathers." We played a few BG tunes related to fatherhood, and we also played several songs from bands featuring fathers and their sons or daughters (or sometimes both). Hope all of the dads out there got a chance to spend some time with their kids yesterday, and, of course, if they spent some of it listening to BG on the radio, so much the better!

We also included a bit of newer music from three CDs. The common "theme" of the CDs (in hindsight) seemed to be New Hampshire banjo picker, Herman McGee, as we played tunes from the brand new CD by Herman's family's band, White Mountain Bluegrass ("Oh So Many Years" on their own WMB label), a recording from a Maine-based group called the Radio Gang (Herman plays the banjo & guitar with this band), and Herman's very-own solo recording called "Family & Friends." All of these CDs are quite good, and doubtless, you'll be hearing plenty more from them in future weeks.

Sam Tidwell's music got a bit more airplay on Sunday, as well. If you didn't make it to the very-fine Sam Tidwell Tribute Day in Sterling last weekend, you missed a really great time. Event co-organizer Myrna Riquier made sure the event was recorded for Charter Communications ATV 14 (serving 16 towns in northeastern CT), so perhaps you'll see a recording of some of the festivities on the air at a future time. We'll let you know if we find out anything about that happening. In the meantime, though, be sure to check out Jack Holland's great blog post about this event, including lots of pictures.

The nice folks at the upcoming Grey Fox Bluegrass Festival have given us four single-day passes (each good for one attendee) to give away on the air, so the plan is to give one away each week between now and the festival (July 16-19). Yesterday's winner was a very happy one -- keep on listening, as we hope to make someone else very happy next Sunday.

Thanks for listening -
Amy

Posted by Bluegrass Cafe at 1:43 PM No comments:

As some of you may know, Jim and I both spent the better part of Sunday at the very fine Sam Tidwell Tribute Day, but we were fortunate enough to be able to call upon the services of recent WHUS Radio Training class graduates, James Ward, and his mom, Cathy to program the BG for us. Listed below you'll find their playlist from Sunday's show. Special thanks to the Wards and to Marti for stepping in on one of those rare occasions when neither Jim nor I could be at the station from 4-7PM on a Sunday afternoon.

As for the Tidwell celebration, it was just a great day filled with fine entertainment for a true New England BG pioneer and legendary character. In addition to music from several fine New England bands (including Jim's band, Pine Creek), Rhode Island-born Jimmy Gaudreau (joined by his singing partner with the amazing voice, Moondi Klein) came out to pay tribute to his mentor. At the end of the day, Sam took the stage himself (joined by several old friends, including fellow Kennebec Valley Boys Bob Denoncourt and Bill Kimball) and played several tunes and told a couple of stories. Kudos to event organizers Myrna Riquier and Fred Etheridge for putting this great tribute together, and thanks again to Sam Tidwell for his years of inspiration to many, many BG pickers!

On Father's Day, I hope you'll join me on the ol' radio. My plan is to play at least a little bit of music by BG fathers and their offspring, so we'll see how that goes...

Posted by Bluegrass Cafe at 3:49 PM No comments:

It has been a busy bluegrass week for us as we came off of the Strawberry Park Bluegrass Festival the weekend prior, and are now preparing for the Sam Tidwell Tribute Day next week. To honor Sam, I played a few tracks from the 1976 LP from Fred Pike, Sam Tidwell, and the Kennebec Valley Boys, "The Last Log Drive" (Revonah). That also comprised Part 1 of my Heritage Corner this week. (see photo) 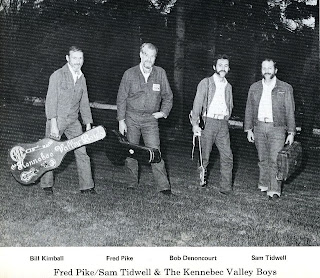 Part 2 was a couple of tracks of the LP from Jimmy Martin with Paul Williams and J.D. Crowe, "Big Jam Session" (Old Homestead).

Also because of the upcoming Sam Tidwell Tribute Day, several songs featured two of the performers at that upcoming event, Jimmy Gaudreau and Moondi Klein.

Also included below Sunday's playlist below is the playlist for a fill-in I did last Sunday, May 31, the evening after the end of the Strawberry Park Bluegrass Festival. I used that time to reprise many of the artists who appeared at the festival.

Amy and I both will be at Sam Tidwell Tribute Day next Sunday. We are working on a bluegrass fill-in, so be sure to tune in at the regular time (if you are not at Sam's tribute!) to see what happens. Jim


Fill-in Sunday, May 31, 2009, 10pm-midnight:
Performers with connections to the Strawberry Park Bluegrass Festival

As promised, here's a bit of information for you on the upcoming tribute day for a New England Bluegrass legend:

Concession stand will be open. Admission and parking are FREE. Bring your lawn chair.

Here's a horrible "problem" -- there's too much great Bluegrass music right now to cram it all into 3 hours a week. We always like to play recordings that are new at WHUS, as really, the music is a living, growing thing, and new music really needs to be heard. However, we also like to weave in each week music from performers' earlier projects, as well as tunes from the pioneers. After all, without a Bill Monroe, the Stanley Brothers, Flatt & Scruggs, Reno & Smiley....where would we be? On Sunday, I had a very hard time playing all of the music I wanted to play in three short hours, but I'm happy to know that there are always future weeks for Bluegrass programming at WHUS.

On Sunday's show, we unveiled some new tunes from projects by Barry Scott & Second Wind ("In God's Time" on Rebel Records), Phil Rosenthal (his own American Melody label's "A Treasury Of Bluegrass & Country Songs"), New Hampshire's White Mountain Bluegrass ("Oh So Many Years" on their own label), and Darin Aldridge & Brooke Justice ("I'll Go With You" on Pinecastle Records, but our copy courtesy of Irene & Ted Lehmann -- thanks to them!). We also listened to tunes from forthcoming projects by two great acts signed to Rural Rhythm Records: Lou Reid & Carolina and Randy Kohrs. We look forward to hearing lots more from all of these performers in future weeks....

In addition, we celebrated a couple of birthdays, most notably those of Tom T. Hall and his wife, Miss Dixie Hall -- born on May 25th & May 26th respectively. It's no secret that both of these fine folks have been writing up a storm in recent years, as it's hard to pick up a new CD by anyone and NOT find a tune written by either Tom T. or Miss Dixie or both. While we could easily fill several programs with tunes composed by these two, we limited ourselves to playing just six of their fine tunes on Sunday. Best wishes to them both for many more years of creativity.

Although it was a bit late, we also paid tribute to the "Singing Ranger" -- Hank Snow -- who would have celebrated his 95th birthday on May 9th. Through the years, many of Hank's tunes have been covered in the BG world, so we picked out just a couple of them to showcase on Sunday.

Last Thursday & Friday, I got to hear (and see) some great BG at nearby Strawberry Park in Preston, CT from the likes of Danny Paisley & the Southern Grass, the Gibson Brothers, Amy Gallatin & Stillwaters, and Kenny & Amanda Smith. Jim shared emcee duties at Strawberry Park, so he'll be able to fill you in next time with info about the rest of the festival.

Along with this week's playlist, I'm also including a playlist for a fill-in I did at WHUS on the morning on Thursday, May 21st. I didn't stick to only BG, but there was a good bit of it showcased that morning.

Hope to see you all at the upcoming Sam Tidwell Tribute Day in Sterling, CT on June 14th. I'll post more about that fine event later this week....

Thanks for listening, and be sure to join Jim & Marti next Sunday as they play even more great Bluegrass for your listening pleasure.

Posted by Bluegrass Cafe at 1:51 PM No comments: