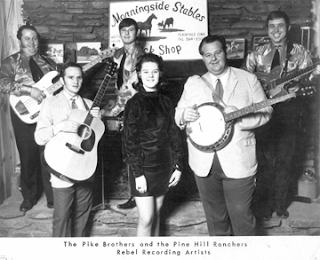 On Sunday's show, I was inspired to shine a bit of a spotlight on the music of some performers from New England who have been recognized at the International Bluegrass Music Museum in Owensboro, Kentucky as "Pioneers Of Bluegrass." While I was delighted to share a bit of music from Pioneers like Herb Applin, Hazel & Mac McGee, Sam Tidwell, Fred Pike, and Joe Val, I find now that these folks deserve to be played much more than just once every couple of months. I'll endeavor to do that in future weeks, for sure. In the meantime, enjoy a couple of these photos of our very own Pioneers from eastern Connecticut -- Fred Pike (on the banjo) and Sam Tidwell (shown with an electric bass in the band photo, and with a fiddle at the "Bluegrass For Food" festival in Sterling on June 13th).
Thanks to Connecticut fiddler (and former WHUS DJ on "The Magic of Bluegrass") Cathy Bumgarner Day for posting so many great photos of her with some of the Pioneers of BG on her Facebook page. The amazing things you can find on the Internet!
In addition to music from the Pioneers on Sunday's show, we included new (or newer) music from the likes of Rhonda Vincent (a single from her forthcoming project on her own Upper Management Music label), the Special Consensus (their celebratory "35" is on Compass Records), Steve Gulley & Tim Stafford ("Dogwood Winter" on Rural Rhythm will be released later this summer), a mostly-a capella gospel recording from Barry Scott & Second Wind ("Sunday Mornin' Meetin' Time"), the fabulous Jimmy Martin-inspired gospel project from J.D. Crowe, Doyle Lawson, & Paul Williams ("Old Friends Get Together" on Mountain Home), and Pennsylvania's Louie Setzer & the Appalachian Mountain Boys (a self-released project called "Wish I Were There"). Connecticut musicians have new recording projects, too: from Fred Etheridge & Nick Anderson there is "Pickin' & Singin' " and a gospel project from the Gallagher Family Band titled, "The Old Fashioned Church."
And you know that we always like to give away things, and so, we did on Sunday. There were 2 CD giveaways, as well as 2 passes to the upcoming Saddleback Mountain Bluegrass Festival in Rangeley, Maine. This one-day event happens on Saturday, August 7th, and features none other than the Del McCoury Band as part of their lineup. For more information, click on their website here. Jim will have more Saddleback passes to give away this Sunday -- be sure to listen for your chance to win!
While I won't be in the "Bluegrass Cafe" again until July 18th, I hope you'll consider joining me for another classic country & BG fill-in this Thursday, July 1st from 10AM-noon. It should be fun.
Have a great 4th, and don't forget to include Jim and the "BG Cafe" in your Independence Day radio listening!
Amy
Requests are RED.
Posted by Bluegrass Cafe at 10:43 PM No comments:

A suggestion of reading material... 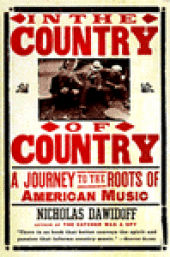 While on the air on Tuesday morning, I made a book recommendation, and said that I'd provide the title/author info online. Then, I promptly forgot to share. Oops.
This book - In The Country Of Country: A Journey To The Roots Of American Music - isn't a new book; in fact, it was written by Nicholas Dawidoff and was published in 1997. Dawidoff, a journalist, visited many of the birthplaces and/or hometowns of several country (and Bluegrass) legends to see if he could get an idea of how environment and surroundings were able to shape these performers. His subjects make for interesting reading, especially if you have any interest in "real" country music and its performers. As Dawidoff's research and interviews were conducted in the 1990s, many of his chosen subjects were still alive and making music (i.e. Bill Monroe, Buck Owens, Harlan Howard, Chet Atkins, Johnny Cash). Other performers profiled include the Stanley Brothers, the Louvin Brothers, Doc Watson, Emmylou Harris, Earl Scruggs, Merle Haggard, and George Jones, just to name a few.
While the book is still available at several online retailers, I suggest you visit your local library to see if they might own the book, or can borrow a copy for you via interlibrary loan. No matter how you have to obtain this book, though, do it, as I think it's worth the effort.
Posted by Bluegrass Cafe at 9:37 PM No comments:

Even though I haven't been on the air to host the "BG Cafe" for several weeks, I've still been able to get my radio "fix" over the past few weeks by doing a few fill-ins. As you might expect in a staff of volunteers, there are always opportunities to do fill-ins -- and so, I've done four of them in the past month. In my fill-in radio time, I've been able to play a whole bunch of classic country music plus a good bit of BG, too. If you have an interest in reading playlists, read on...
And I hope you'll join me in the "BG Cafe" this coming Sunday, June 27th.
Friday, May 28th - 1-3PM: Included were a few tunes appropriate for the start of Memorial Day weekend.
Tuesday, June 8th - 8-10AM: While filling in for a guitar-heavy program called "Red House," I played two versions of a mighty fine guitar instrumental ("Buckaroo"), as well as several tunes from a 1950s RCA Victor LP in our WHUS library, "Hank Snow's Country Guitar." Mr. Snow not only possessed a very fine, unique singing voice, but a super-distinctive guitar style, as well. This is great stuff I was quite happy to share...
Thursday, June 17th - 10AM-noon: The classic country/BG mix this week included tributes to 2010 Country Music Hall of Fame inductee, Jimmy Dean, who died June 13, 2010, as well as 1985 CM Hall of Fame inductee and bona fide BG legend, Lester Raymond Flatt, who was born on June 19, 1914.
Tuesday, June 22nd - 8-10AM: Another "Red House" fill-in so we put a spotlight on one of the greatest traditional guitar pickers of the 20th century, Arthel Lane "Doc" Watson. There's so much great Doc music, it was difficult to limit myself to just a few tunes, but there are always more radio shows...
Posted by Bluegrass Cafe at 8:22 PM No comments: