The Bluegrass Cafe was split exactly in half by a 2-hour UCONN womens basketball game, so the show was just an hour long including both halves.  We tried to make it worth your while to keep the radio on WHUS on both sides of the game by playing some great music, including new music from Del McCoury, Kathy Kallick, Wayne Taylor & Appaloosa, Maranacook String Band (a Maine band with songwriter Stan Keach), Gelina & Pike's Mainly Grass (another Maine band with CT and RI roots), and Lonesome River Band from the live tribute to Bill Monroe recorded at Bean Blossom earlier this year. 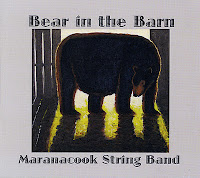 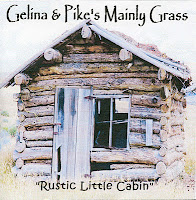 Amy will be with you next Sunday, perhaps without preemptions if we are lucky.  Be sure to tune in!

We enter the busy season this week, as it seems like between Thanksgiving and New Year's, there is always a whole lot going on with family gatherings and special holiday events, not to mention all of the "everyday" stuff that still has to get accomplished.  I think I might have begun my busy season a bit earlier this year, as there was a whole lot of great music happening in the area, and missing any of it just wasn't an option.

After enjoying David Peterson's Old Time Country Revue on Thursday night in Hamden, I got to see and hear the amazing Eddie Adcock perform at the Country Corner Coffee House on Saturday night.  Eddie was joined by wife, Martha, and old pal and Classic Country Gentlemen bandmate, Tom Gray.  What a terrific trio!  These three performed lots of music from their recently released Patuxent Music CD, "Many A Mile."  As you probably know, this CD primarily features Eddie & Martha's versions of tunes Eddie originally recorded with the Country Gentlemen back in the 1960s.  It's really a fantastic recording, and I'm sure the folks who got to see the Eddie, Martha & Tom show at the Firebox Restaurant today got to hear a lot from it, too.

Today's show included birthday tributes to some folks who'll be celebrating this week:  Charlie Sizemore (born November 23, 1960), Adam Steffey (born November 24, 1965), and the one and only Eddie Stubbs, who'll turn 50 on November 25th.  While Eddie is primarily recognized these days as a WSM award-winning broadcaster and a "walking encyclopedia of country music," for some of us, he'll always be remembered as the young fiddler from the Johnson Mountain Boys.  For the last few years, I've closed my broadcasts of the BG Cafe with the JMB version of the "Black Mountain Blues" which features Eddie's fiddling, and I don't think that will be changing anytime soon. 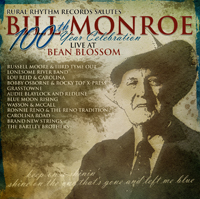 On November 22nd, Rural Rhythm Records will officially release their latest "special event" CD:  a live recording featuring a whole lot of their RR performers singing Bill Monroe tunes at the 2011 Bean Blossom Bluegrass Festival.  The CD is called, "Rural Rhythm Records Salutes Bill Monroe:  Live At Bean Blossom."  It's a winner, and another fine tribute to the Father of Bluegrass during this, the centennial celebration year of his birth.  We heard a couple of songs from the CD during today's BG Cafe, and will likely be hearing several more songs from the disc over the next few weeks.  Other newer music came from the previously-mentioned CD by Eddie & Martha Adcock with Tom Gray, Carolina Road, Terry Baucom, Volume Five, the Missy Werner Band, Ivan Rosenberg & the Foggy Hogtown Boys, the Crowe Brothers, John Bowman, Wayne Taylor & Appaloosa, Russell Moore & IIIrd Tyme Out, Gelina & Pike's Mainly Grass, and two forthcoming Mountain Fever Records releases from Travers Chandler & Avery County, as well as Heather Berry & Tony Mabe.


We also celebrated the life of Pete Soukas, a great New Hampshire musician who died on November 13th after a lengthy battle with cancer.  Pete may be best-remembered as the bass player (and sometimes singer) in the very fine New Hampshire-based BG band of the 1990s:  Stonewall Bluegrass.  In addition, Pete was featured on a couple of tracks from the great "Look To The Light" CD of music written by Rick Lang, so we included those songs in Sunday's show, as well.

Hope you all have a very Happy Thanksgiving!  Be sure to join Jim for another edition of BG Cafe as you wind down your holiday weekend next Sunday afternoon...

With the bad weather and power outages mostly behind us, it was a super day to enjoy 3-1/2 hours of bluegrass music, the extra half-hour thanks to a preceding game ending early.  Marti even joined us in the studio this week.

Laurie Lewis provided a song of local interest from her new album, Skippin' and Flyin', about the circus fire that occurred in Hartford in 1944, and we heard songs from the latest releases of Lee Marcus, Wayne Taylor & Appaloosa, Shannon Slaughter, The Crowe Brothers, Junior Sisk & Ramblers Choice, Frank Wakefield, Russell Moore & IIIrd Tyme Out, and Nothin' Fancy.

We also played from Del McCoury's new tribute to Bill Monroe -- a vinyl LP -- and an instrumental from the Lonesome River Band's latest CD in salute to their appearance on David Letterman's show the previous Friday night.  We also played the song they performed on that show from Larry Cordle's latest CD.

We hope you tune in next Sunday when Amy will make the banjos and fiddles ring!

What a crazy week this has been!  As you may know, Connecticut was hit with a record-breaking October snowfall two days before Halloween, and as a result, lots of trees and wires were knocked down; hence, a good portion of the state was without electricity for many, many days.  In fact, some folks are still without power 8+ days after the storm.  Pretty crazy, and winter hasn't even officially begun yet.  Yikes! 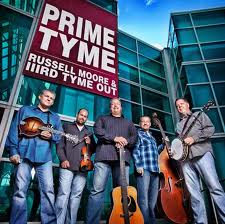 For Sunday's show, our goal was kind of standard -- try to play a bunch of newer BG and balance it with a few favorites.  I think that was able to be accomplished fairly easily with newish music from folks like Lee Marcus, Ivan Rosenberg & the Foggy Hogtown Boys, Leon Morris, the Del McCoury Band, Blue Highway, Wayne Taylor & Appaloosa, the Missy Werner Band, Eddie & Martha Adcock with Tom Gray, Ethan Hughes, Russell Moore & IIIrd Tyme Out, and the Crowe Brothers. 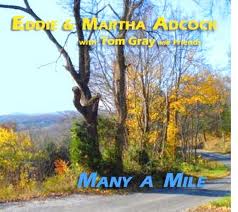 Brand spanking-new music came from two CDs:  one from a group from Maine with Connecticut ties:  "Rustic Little Cabin" from Gelina & Pike's Mainly Grass (a group which includes Gordon Pike and his wife, Gail, along with one other couple); and the other from a singer-songwriter who was born in Maine, but now makes her home in Florida:  Cheryl J. Watson's "Watertown."


The show began with five tunes from the ever-prolific pen of Country Music Hall of Famer, Bill Anderson, who celebrated his 74th birthday on November 1st.  I will never claim to be a fan of the singing talents of ol' Whisperin' Bill, but there is no disputing that he is one of the greatest songwriters in the history of country music.  Like a whole lot of other great country performers, the music of Bill Anderson has been mined for use in Bluegrass through the years, and we selected five versions of Anderson classics to open the show.  These songs were performed by Bob Paisley & the Southern Grass, the Osborne Brothers, the Johnson Mountain Boys, James King, and the Sand Mountain Boys.  Great stuff.


Hope you were able to enjoy at least part of the show this week, and that you'll be sure to join Jim in next Sunday's "Bluegrass Cafe," beginning at 4PM sharp.  Be there, won't you?


Have a fine week!


Posted by Bluegrass Cafe at 9:43 PM No comments:

We've seen some rough times, but not too many like this past week.  The Saturday afternoon before this show a huge swath of Connecticut and Massachusetts was blanketed with a wet, heavy snow that downed trees and power lines across New England.  Fortunately the UCONN campus was spared the loss of electricity and WHUS and the Bluegrass Cafe soldiered on through the hardship. Many listeners were tuning in on car radios or portables.  As many discovered, radio was one of the few windows on the outside world during the extensive power outages. My house was without power for 6-1/2 nights -- it was restored at 1:00am Saturday morning a week later -- and that has delayed this post.

The show last Sunday was the day before Halloween, so I dedicated the first hour to songs about murders and spooky ghosts, topics which abound in bluegrass music.

The show was shortened by an hour for a UCONN soccer game, so the final hour was mostly new music and our traditional gospel set.

Amy will be at the helm of Bluegrass Cafe next Sunday, so be sure to tune in.

Posted by Jim Beaver at 3:57 PM No comments: