James Ward and his mom, Cathy, began their own one-hour BG show at WHUS last Monday, September 20th. The show airs from 3:00-4:00PM every Monday, so won't you think about joining them tomorrow?
Here's what they played during the first show on September 20th...
Posted by Bluegrass Cafe at 10:37 PM No comments:

I'm off to Nashville this week, so not sure I'll have a chance to post a bunch of details about today's BG Cafe anytime soon. In the meantime, here's the playlist...

Our "agenda" for Sunday's show included playing a few tunes from some of the nominees for various IBMA Awards this year, as well as a bit of music representing the two Hall of Fame inductees for 2010 (John Hartford and Louise Scruggs). About midway through the show, we had a telephone conversation with Connecticut Bluegrass promoter, Chris Wuerth, who for the past couple of years has put together some top-notch shows in the New Haven area. Chris's next concert features Tim O'Brien & Bryan Sutton on October 2nd, and David Peterson will be playing in Hamden on November 1st. For more information, visit www.guitartownct.com.


Posted by Bluegrass Cafe at 10:18 PM No comments:

When school is in session at UCONN, that means that the various sports teams are also playing. At WHUS, our Sports Department works hard to broadcast LOTS of sporting events during the school year, including not only the "biggies" of football and basketball, but also, Men's & Women's Soccer, as well as both Ice and Field Hockey during their respective seasons. Generally, the Sports folks are very good at telling us when one of our programs will be preempted for sports so that we can pass the information along to prospective listeners ahead of time. This past Sunday, though, a Men's Soccer preemption that was supposed to go from 1-3PM ended up happening from 2-4:15ish, instead. So, we got a late start, but still squeezed in a whole lot of music. Hope you don't feel "short-changed."

We featured a good bit of brand new music from quite a few performers, including music from the forthcoming third release from Balsam Range ("Trains I Missed" on Mountain Home), as well as duo Fred Carpenter & Tim May, and a Colorado band called the Blue Canyon Boys. The Boxcars are a new band of veterans with a new self-titled CD on Mountain Home, and they are good! That's not really surprising, though, when the band includes Adam Steffey on mandolin, Ron Stewart on banjo, John R. Bowman on the fiddle, Keith Garrett on the guitar, and Harold Nixon on the bass. No doubt you'll be hearing lots more from their fine debut recording in future weeks of the BG Cafe. 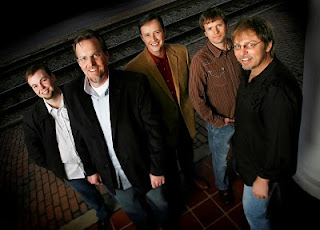 
Since Hank Williams was born on September 17, 1923, I couldn't resist putting together a few Hank tunes done in the BG style as a way of tribute. Is there any style of music in which a Hank Williams tune hasn't been covered? Maybe rap, but who knows?


Jim told you last week about a new program that hit the airwaves at WHUS just yesterday. James Ward and his mom, Cathy, debuted their program called, "Bluegrass Rules" on Monday -- be sure to join them every week from 3-4PM, if you can!


I'll join you once more this coming Sunday, so hope you'll be able to tune in for at least a few minutes...

Posted by Bluegrass Cafe at 2:34 PM No comments: 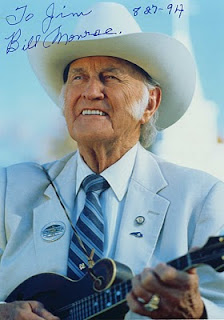 Since Sunday was just a day before the anniversary of William Smith Monroe's 99th birthday, and just a few days after the anniversary of his death in 1996, this entire show was dedicated to music by, of, about, and in honor of Bill Monroe.

In addition to the many artists performing the songs of Bill Monroe, we brought you several interesting recordings of Bill himself that included a very late 1995 studio performance with Earl Scruggs (first time in the studio together since the 1940s) and Byron Berline, a duet with Emmylou Harris, and an instrumental duet with Doc Watson. We also heard from The Monroe Brothers (Bill & Charlie), and what is certainly one of the strangest tunes Bill ever wrote, "My Last Days On Earth."

We played the last two studio recordings made by Bill Monroe. The songs appeared on a tribute project by Billy & Terry Smith released in 1997. You may know Terry Smith as the bass picker with The Grascals, and Billy Smith as a great songwriter who records by the name Billy Boone Smith.

Probably the rarest tune we played was an undocumented radio air check of Bill playing an otherwise unknown instrumental called "Orange Blossom Breakdown" that sounds like it came from a version of the Blue Grass Boys with Lester Flatt and Earl Scruggs which would date it in the late 1940s. (Airing this tune caused one listener to nearly run his car off the road.)

If you haven't ye 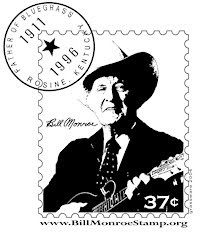 t supported the campaign to have the USPS issue a stamp for Bill Monroe, you can do it now by going to http://www.billmonroestamp.org/

We hope you enjoyed our tribute to Bill. We have come to love our annual celebration of Monroe because it keeps the source of our favorite music in our minds and relevant, and we hope you feel the same way.

Amy will make the banjos and fiddles ring next Sunday, so be sure to tune in.

Also, the new schedule at WHUS will begin later this week, and you now can look forward to another bluegrass program on Monday afternoons from 3 to 4pm ET titled "Bluegrass Rules" with long time "Bluegrass Cafe" listeners and sometime fill-in hosts James Ward and Cathy Ward. Be sure to check them out at 91.7 FM or whus.org

Posted by Jim Beaver at 9:00 PM No comments:

Outdoor BG -- enjoy it while you can!

There are at least two events happening in CT on Saturday, September 18th which involve live Bluegrass music. Hope you can partake of at least one...
The Hartland Hollow Bluegrass Festival (#11?) takes place at Berg Field in East Hartland, and features several area bands. Music begins at 10AM and will run until about 8PM. The lineup includes ShoreGrass, Cindy Rines & Mad River Crossing, Acoustic Blue, TrueGrass, Bear Minimum, Crossover, and Old Country Road. This event is put on by the Town of Hartland as a non-profit benefit. For more information, call (860)844-8526. This year, there is a Hartland Hollow Bluegrass Festival website, so visit that site for directions on how to get to the festival. You can also view a copy of the festival flyer by clicking here.
An event that's not purely BG also merits a mention here, as New England Bluegrass Pioneer Sam Tidwell will make an appearance. The Preston City Congregational Church in Preston, CT hosts their 5th annual Scarecrow Festival. While this festival is billed as an old-fashioned, small-town harvest celebration with lots of vendors, activities for the kids, and food, there is plenty of fine, free entertainment to be enjoyed, as well. Sam Tidwell, John Stey & Friends will be performing from 3 to 5PM. If you'd like more information on the Scarecrow Festival (including directions), click here.
Posted by Bluegrass Cafe at 7:34 PM No comments:

At WHUS, we like to play new music. That simple rule applies to just about all of the shows on the air and the various genres of music that are played at WHUS, and it certainly includes us at the BG Cafe. This week, in addition to including some music from a few of the Masters -- Bill Monroe, Flatt & Scruggs, the Stanley Brothers, Jim & Jesse, Reno & Smiley -- we featured some extremely new music from the likes of Wayne Taylor & Appaloosa, Balsam Range, and the Peter Rowan Bluegrass Band. H
ope you enjoyed the mix...
If you attended the Strawberry Park Bluegrass Festival back in June, you may have seen Wayne Taylor & Appaloosa performing. Until his retirement in 2008, Wayne was the featured singer and guitar player with the U.S. Navy's country music band known as Country Current. His first post-retirement gig was with Bill Emerson & Sweet Dixie, but it wasn't long before Wayne launched his own band which he named after a tune he'd written years before, Appaloosa. This group's second CD release is called "Out In The Middle Of Nowhere." The current band includes Wayne on guitar and lead vocals, Emory Lester on mandolin and vocals, Lee Marcus on banjo and vocals, and Kene
Hyatt on the bass. It wouldn't surprise me to see these guys play more in New England in the 2011 and beyond...we'll have to wait and see. 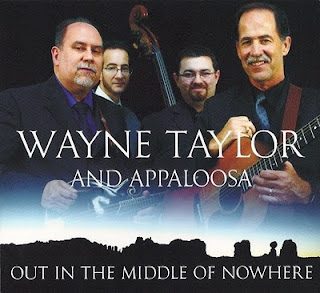 We also included the title track from the forthcoming third recording from North Carolina band, Balsam Range. This new CD on Mountain Home Records is titled, "Trains I Missed," and should be available for us radio types sometime very soon. I look forward to hearing the whole CD. And while Peter Rowan is not exactly "new" to the Bluegrass world, his new recording for Compass Records features the Peter Rowan Bluegrass Band (including Jody Stecher on mandolin, Keith Little on mandolin,and Paul Knight on bass), and is titled, "Legacy."
September marks the anniversary of the birth and death of the Father of Bluegrass, Bill Monroe (born September 11, 1911--died September 9, 1996). There's no doubt that there will be many, many special celebrations in the world of Bluegrass as we work toward the Bill Monroe Centennial year, so we started our own little celebration on Sunday by playing 7 tunes written by or about Bill Monroe. Don't be surprised to hear a whole lot more Monroe tunes and tributes in future weeks.
Jim joins you for next week's BG Cafe -- be sure to tune in beginning at 4PM on Sunday.
Have a good week -
Amy
REQUESTS ARE RED.
Posted by Bluegrass Cafe at 8:53 PM No comments: