Hi Folks,
For this four-hour show we paid tribute to Wade Mainer on his 104th birthday (4/21) and Hazel Dickens who died Friday (4/22). An extended gospel set featuring songs with an Easter theme finished the show. 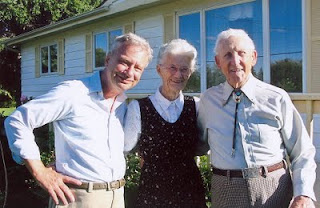 Wade Mainer was born in Buncombe County, North Carolina, near Weaverville, in 1907. He joined his brother J.E. in Concord, North Carolina (my hometown - JB) around 20 years later to get work in the local textile mills, and it was there he joined his brother's fledgling band which won appearances on powerhouse WBT in Charlotte thanks to Crazy Water Crystals (a patent remedy), and then recording sessions for Bluebird (division of Victor) beginning in 1935. Those early recording sessions produced one of the most popular hillbilly records of the 1930s, a reworking of Gussie L. Davis' "Maple On The Hill" that included an original melody. Wade split amicably with his brother in 1936 and blazed his own musical path which led him to Flint, Michigan, in the early 1950s where he got a job with General Motors. Partly because of a strong religious rededication, Wade and his wife Julia stopped playing at all for many years until Molly O'Day convinced him that people were still interested in his music. Wade and Julia recorded several records for John Morris' Old Homestead label in Flint over the next few decades. Wade's last official record was released in 1992. Because of the influence of Wade's music and transition technique of using two fingers to pick the banjo, he is sometimes called the Grandfather of Bluegrass Music. The photo shows Dick Spottswood (musicologist and DJ), Julia, and Wade Mainer. 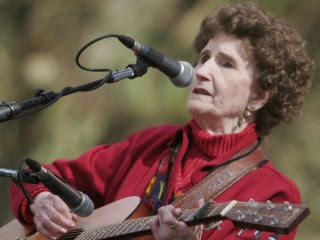 Much has been written about Hazel Dickens since she passed away April 22 from complications of pneumonia, but I remember her as a powerful singer and songwriter who took her inspiration from the downtrodden of whom she felt a part. She was as well known in folk circles as bluegrass; nevertheless, in the 1960s Hazel, along with Alice Gerrard, began the first bluegrass band headed by females. Bill Monroe liked her, and one of the songs we played on this show was from an all night jam at Tex Logan's house in 1966 where Monroe called her up to sing with him. Her songs, her intensity, and her character have inspired many musicians and others over the years.

Because this show fell on Easter, the last hour and a half of was devoted to bluegrass gospel music inspired by the Easter story.

Be sure to tune in Sunday 5/1 when Amy will make the banjos and fiddles ring. 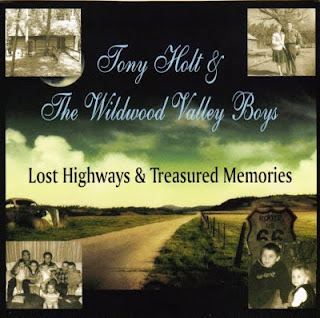 On Sunday, we had an additional hour for BG programming, as Dr. B. and his "Musical Prescription" were out of town for the week. Thus, we spent our first hour playing some classic BG tunes and performers that we don't get to play as often as we might like on the ol' radio. These days, it's really difficult to find enough time in just three hours per week to play a good mix of newer BG tunes and performers, as well as some of the folks who set the standard. We embrace these extra hours from time to time -- hope you enjoyed listening to a bit more music than usual from folks like Lester & Earl, Jimmy Martin, Bobby & Sonny, Red Allen, Jim & Jesse, the Lilly Brothers, Reno & Smiley, and, of course, the Father of Bluegrass.


A few weeks ago, I was at home listening to Jim on the BG Cafe, and I heard him mention and play Joe Diffie's recent Bluegrass recording on Rounder called, "Homecoming." Jim mentioned that he wasn't aware that Joe Diffie, like a whole bunch of formerly successful country music singers who've decided they'd like to try to make a BG record, had ever performed Bluegrass previously. Well, as one who's admired Joe Diffie since his debut country single back in 1990, "Home," I've long been aware of his "Bluegrass pedigree," and several years ago, I acquired a copy of a 1983 LP by an Oklahoma BG band known as Special Edition. Diffie had been a member of this band along with multi-instrumentalist Billy Joe Foster, who would later go on to work with Ricky Skaggs, among others. It's always fun to play a bit of "then & now" with some of these performers. 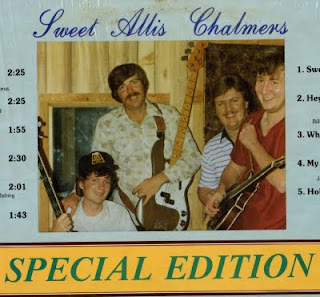 Hope you enjoyed something you heard on Sunday's show, and I encourage you to spend some time on Easter Sunday with Jim in the BG Cafe. He'll be with you beginning at 4PM...do join him!

Have a nice Easter!!

Posted by Bluegrass Cafe at 9:12 PM No comments:

I got the opportunity to do a last-minute fill-in for the free-form show on WHUS called "Fiat Flux." The show is known for bringing unusual productions to the airwaves, many times including live music and/or interviews.

For this show, th 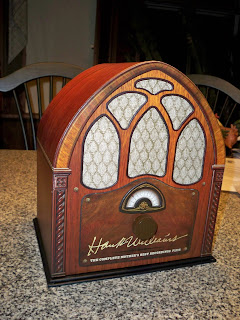 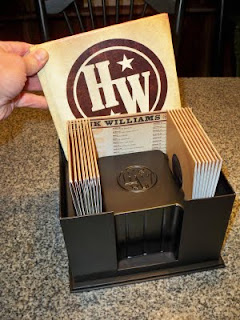 y the Mother's Best Mills, a flour and feed maker. The Complete Mother's Best Recordings have been released by Bear Family in a huge boxed set that comes in the shape of an old table top radio.

If you happened to catch this broadcast, I hope you found it enjoyable. 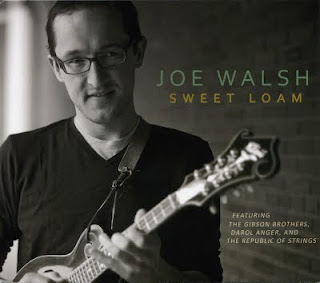 A special theme for a couple of sets was "coal mining." The topic has been a great source of inspiration for songs pro and con about all aspects of the activity covering economic impacts, environmental impacts, and health and emotional impacts. I believe I could do at least a whole show of bluegrass coal mining songs and still have many left over. 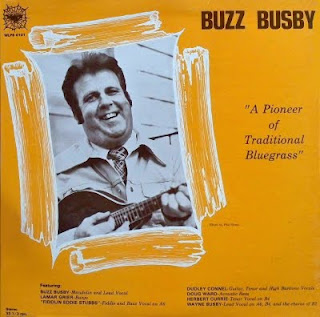 Key tracks from the Heritage Corner included both sides of the first single ever released by The Johnson Mountain Boys, and some tracks from a 1981 LP from Buzz Busby that included Eddie Stubbs, Dudley Connell, and Lamar Grier.

The "theme" for Sunday's show was simple: more music, less talk. As it was the first show since the ending of our annual Radiothon campaign, the plan was to play lots of great music, and I think I was able to fill that mission with few problems.

It was a sad week for Bluegrassers with two notable deaths: banjo picker Jake Jenkins was killed in a plane crash on March 27th, and then, award-winning songwriter Harley Allen died after a battle with cancer on March 30th. We played music in remembrance of both of these fine musicians on Sunday's show, first, with several tunes written by Jake when he was a founding member of Karl Shiflett & Big Country Show. Even though Jake Jenkins had, more or less, retired from Bluegrass when he became a firefighter in Lubbock, TX, he certainly left an indelible impression on a whole lot of folks. 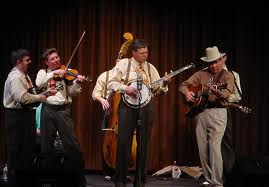 Harley Allen was the youngest son of BG legend, Red Allen, and while Harley certainly could sing and play Bluegrass, he may be better-known as a Nashville songwriter. In 2005, Harley Allen was the BMI Songwriter of the Year, and a tune he co-wrote, "Me And John And Paul," was named the IBMA Song of the Year. My first introduction to Harley Allen came through his membership as one of the Big Dogs -- a short-lived group featuring Tony Trischka and David Grier, as well as Andrea Zonn and Debbie Nims. Great stuff. 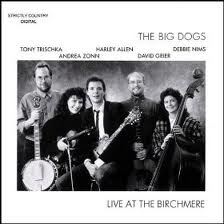 While our Radiothon playlists were limited to music from recordings we had available as premiums, the playlist for Sunday's show didn't have those restrictions. We've received a few new recordings over the past few weeks, so we were able to showcase a couple of those new discs on Sunday with music from Terry Baucom, Grasstowne, Tom Mindte & Jeremy Stephens, James Reams & the Barnstormers, and Bill Emerson. As always, it never seems like there's enough time to play everything I really WANT to play, but there's always next time...

Thanks again to all of you who took the time to pick up the phone and give us a pledge during Radiothon. As we told you on the air numerous times, BG Cafe had a pretty high two-week show goal ($3,000) -- in fact, it was the highest goal for any of the music programs on the air at WHUS. Of course, we didn't want to fall short, as Jim and I always like to think that the BG is the most popular music form on the radio. You folks were awesome, and we're delighted to keep bringing you the Bluegrass music at WHUS. One final note -- Robert from Broad Brook, CT was the winner in our Second (perhaps) Annual "Bonus Book Bonanza" in which we gave away copies of both Richard D. Smith's Bill Monroe biography, Can't You Me Callin', as well as a book called, Honky Tonk, filled with great photographs of Bluegrass and country music performers taken by Henry Horenstein. The only way to get into the end-of-Radiothon drawing was to make a pledge to WHUS during the 2 weeks of fundraising. Congratulations to Robert, and thanks again to everyone who pledged...and to everyone who continues to tune in each week.

Jim joins you on the air this coming Sunday, so be sure to make plans to join him beginning at 4PM...

Posted by Bluegrass Cafe at 9:27 PM No comments: