At this week's BG Cafe, we took some time to remember a friend, acknowledge the anniversary of some important country music recording sessions, and, of course, talk a good bit about the upcoming 15th annual Podunk Bluegrass Festival. (And, of course, we still managed to play a couple of fine new BG tunes, too). 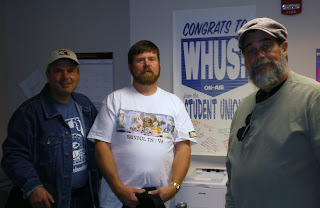 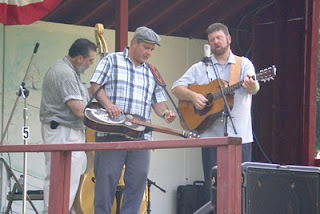 Our Connecticut Bluegrass friend was musician and all-around good guy, Matt Nozzolio, who died suddenly on August 2, 2008 at the age of 53. Matt was someone who simply loved to play music -- whether it be on the accordion in a Mexican band or on the Dobro with CT bands like Amy Gallatin & Stillwaters, Charter Oak Bluegrass, or, with his last band, the old-time country music trio, the Bristol Boys. The photos here show Matt with the Bristol Boys visiting WHUS and the "Red Rooster Party" in October 2007, and on the stage at the Buttery Brook Bluegrass Festival in July 2008, just a few weeks before Matt's sudden passing. We played a couple of tunes from the one-and-only Bristol Boys' recording in honor of Matt, and we'll continue to remember him for years to come...
The Bristol Boys were named by Matt in honor of Bristol, Tennessee & Virginia -- the Birthplace of Country Music. It was in Bristol on August 1, 1927 that A.P. Carter along with his wife, Sara, and sister-in-law, Maybelle made their very first recordings. The influence felt by the music of the Carter Family goes far beyond just country music. As you can imagine, many a BG performer has recorded a Carter Family tune, and we only scraped the surface on Sunday by playing four of those tunes. Someday, we may devote a whole show to just the music of the Carter Family...in fact, we might just spend a bit more time with Carter tunes this coming Sunday.
And let's not forget that the 15th annual Podunk Bluegrass Festival begins this Thursday, August 5th at Martin Park in East Hartford, and culminates Sunday, August 8th with the annual band competition. Over the course of four days, there will many, many hours of great music from the likes of David Davis & the Warrior River Boys, the Josh Williams Band, James Reams & the Barnstormers, the Expedition Show, Michael Cleveland & Flamekeeper, Rhonda Vincent & the Rage, Next Best Thing, and on Saturday night, Ricky Skaggs & Kentucky Thunder. Jim and I both hope to see you there!
Also on the Podunk bill for 2010: the Gibson Brothers. Last week, I recorded an interview with Eric Gibson, and we played that piece on Sunday afternoon. The Gibsons are keeping a very busy schedule these days, and that's certainly not a bad thing. It's great to see the success of this band who first appeared on the New England BG festival circuit sometime in the mid-1990s. (On a personal note, I first heard of the Gibson Brothers around 1995, but didn't see them in person until the Thomas Point Beach BG Festival in 1996). They've come a LONG way since then, no doubt, and you'll have another chance to see them in CT this Saturday, August 7th at Podunk.

Finally, we got to talk to Podunk promoter and organizer, Roger Moss. Talk about being a busy man! Roger took a few moments from a crazy Podunk preparation week to tell us more about the festival, all of the great workshops and activities for the kids, and he even offered a free one-day pass to a lucky caller. Thanks to Roger and to all of the hardworking Podunk Festival Board.
We hope to see you this weekend at Podunk. While Jim will be busy with his Stage Captain duties, I'll be helping our old WHUS friend, Myrna Riquier, at the Podunk workshop area. Stop by to say hello -- we just may have some WHUS goodies for you...
As always, thanks for listening, and we'll be on the air with you again this coming Sunday...
Amy
Requests are RED.
Posted by Bluegrass Cafe at 9:27 PM