There were many reasons we played certain songs on this show. To start off, Karl Shiflett and Big Country Show was in the area Saturday night at the Salem Barn, and again on this very evening at the TrueGrass Series at the Firebox, so we played a tune from a project by Karl's fiddler, Charlie Lawson, and one from Karl himself from his first Rebel project.

Next we celebrated Mr. Alton Orlomoski's birthday (that's Amy's and Tex's father) by playing three of his favorite songs by Elton Britt, Gene Autry, and The Carter Family. While all three have been done bluegrass style, we chose to play original or period versions as he might have heard them first. 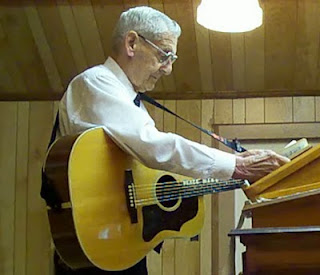 Marti and I had been in our home state of North Carolina a week earlier, and got to spend most of an afternoon with my friend J.E. Mainer, Jr (photo left) -- son of string band pioneer J.E. Mainer. J.E. Junior was born in 1924, witnessed the entire musical career of his father, and was himself a member of J.E. Mainer's Mountaineers after WW2. Even at 86, he still plays and sings at his church. We played one of his dad's King recordings made in the 1940s to celebrate our visit. 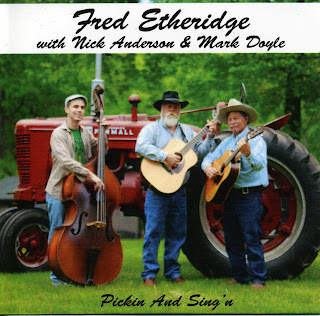 We closed the gospel set with a song written by beloved Eastern Connecticut guitar picker, Fred Etheridge, recorded with help from Nick Anderson and Mark Doyle. Fred has experienced some serious health issues recently and is in the hospital, but his song, "What Would You Do," is gaining many fans in the area.

Amy will make the banjos and fiddles ring next Sunday 4-7pm ET, so be sure to tune in 91.7 FM in the area, or whus.org over the web.