Sunday marked the tail end of the tremendously successful Podunk Bluegrass Festival, but we kept the great music going on the airwaves at WHUS. Hope you were able to join us on your journey home...or, if you weren't at Podunk, we just hope you were able to join us!
The BG world lost another important member this past week on Monday. Mitch Jayne, the bass playing, pipe-smoking songwriter and primary yarn-spinner for the Dillards, died on August 2nd after a brief battle with cancer. The Dillards left the Missouri Ozarks early in 1963 and headed west to California to find their fame and fortune. Within a short time of arriving in Los Angeles, the group was signed to a recording contract by Elektra Records, and soon, they found roles on the super-successful "Andy Griffith Show" as members of the Darlin Family. Jayne stayed in California for about ten years, but then, returned to the Ozarks to write books and soak in Ozark culture. In 2009, the Dillards were inducted into the Bluegrass Music Hall of Fame. On Sunday afternoon, we played a few tunes from the Dillards -- most of which were co-written by Mitch Jayne, and have become standards in the BG world, such as "The Old Home Place" and "Dooley." RIP, Mitch Jayne. 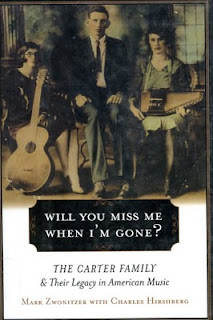 This Dillards photo (with Steve Cooley on the banjo) was taken at the 1991 Winterhawk Bluegrass Festival.
We also grouped together a few tunes that were originally recorded by the Carter Family, who'd made their first recordings on August 1, 1927. We could easily fill several shows with just Bluegrass versions of tunes from the Carter Family Songbook, but for Sunday, we limited ourselves to about a dozen songs. If you'd like to learn more about the Carter Family, there was a very fine biography published in 2002 and titled, Will You Miss Me When I'm Gone? : The Carter Family And Their Legacy In American Music by Mark Zwonitzer with Charles Hirschberg. If you can't borrow a copy from your local library, I'm sure there are copies available from one of the online used book sellers.
Be sure to join Jim as he returns to the BG Cafe this coming Sunday, August 15th. I'm sure it will be a great show so do tune in beginning at 4PM...
Have a great week, and thanks for listening!
Amy
REQUESTS ARE RED.

Posted by Bluegrass Cafe at 6:09 PM