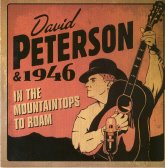 This Sunday, Massachusetts native David Peterson will join us via the phone on the "Bluegrass Cafe." Mr. Peterson and his band, 1946, will be making a rare appearance in the area when they perform at Dave Helman's Bluegrass at Buttery Brook Park in South Hadley, MA on Saturday, July 22nd. The current recording from this group - In The Mountaintops To Roam -- is, put simply, quite excellent. If you like traditional Bluegrass, this CD is loaded with some great tunes, including covers of a couple of Mac Wiseman gems, "I'll Still Write Your Name In The Sand" and "Bluebirds Are Singing For Me," as well as versions of Hank Snow's "Golden Rocket," and Bill Monroe's "You'll Find Her Name Written There." In addition to those songs, there are a few originals, as well, including a tune I am especially fond of, "1946." Obviously, I'm not the only BG radio-type who likes this song, though, as the tune is making its way up the National Bluegrass Survey in good form (#16 in the July issue of Bluegrass Unlimited). After all, what is there not to like about a song that mentions both Fenway Park and Ted Williams?