For this last Bluegrass Cafe of 2012, the majority of the music played on the show came from recording projects that were received at WHUS during the year.  During 2012, we've added 90 new CDs to our music library at WHUS, and while time didn't allow me to play songs from each of those discs today, I tried to squeeze in as much new music as possible.

During the show, we also remembered a few of the Bluegrass legends who left us in 2012, including Doug Dillard, Everett Lilly, Doc Watson, and Earl Scruggs -- all members of the Bluegrass Hall of Fame.  A bit closer to home, we lost two notable New England Bluegrass originals in 2012:  the one and only Sam Tidwell died in April after a lengthy battle with cancer, and just last month, Allan "Mac" McHale died from heart problems a few hours after playing a show in his hometown of Bangor, Maine.  Both of these men are recognized as "Pioneers of Bluegrass" by the International Bluegrass Music Museum, and their music will remain an important part of our BG programming at WHUS for years to come.

Sadly, we're ending 2012 by adding another name to the "Gone But Not Forgotten" list.  On December 29th, Dobro master and Seldom Scene co-founder, Mike Auldridge, died one day before celebrating what would have been his 74th birthday.  A native of the Washington, D.C. area, Mike was inspired to play the Dobro after hearing the sounds of Buck Graves playing in the band of Wilma Lee & Stoney Cooper.  The Dobro playing (and great baritone singing) of Mike Auldridge has inspired many a picker who has come after him, and without a doubt, his super-neat stage attire will be remembered for years to come.  We remembered Mike Auldridge the best way we know how:  by playing a whole lot of his music, including Seldom Scene classics, a couple of songs from Mike's first professional gig in the late 1960s with Bill Emerson & Cliff Waldron, and later tunes from recordings Auldridge made with T. Michael Coleman and Lou Reid, as well as Richard Bennett and Jimmy Gaudreau. 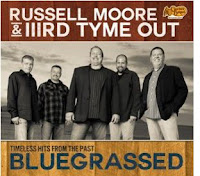 In addition to a whole bunch of 2012 music, we squeezed in a couple of songs from a soon-to-be-released CD from Russell Moore & IIIrd Tyme Out.  This CD is called "Bluegrassed," and will only be available at Cracker Barrel restaurants.  The song selection includes mostly covers of 1960s and 1970s country songs from the likes of John Denver, Don Williams, Gene Watson, and Glen Campbell, among others, but there are also a couple of bona fide BG songs.  Those Bluegrass songs are the ones we played today.

A program note:  if you're looking for a place to listen to BG on the radio on New Year's Day, we invite you to join us at WHUS.  From 1:00-3:00PM, I'll join you for a fill-in program featuring some classic country music and Bluegrass (expect to hear some Hank Williams), and then, from 3:00-5:00PM, it'll be James and Cathy Ward with their "Bluegrass Rules" program.  Be sure, as well, to join Jim next Sunday afternoon from 4:00-7:00PM in the Bluegrass Cafe.  Sounds like a great way to start a new year to me!

Thanks for listening to us throughout 2012, and we hope you'll keep on tuning in during 2013!  Happy New Year!

REQUESTS ARE RED; 2012 RELEASES ARE BROWN.