Most of the time, I like to think that I'm a fairly calm, go-with-the-flow person. On Sunday, though, I felt more like the show was going about 90 miles an hour, and I just never could quite catch up. I suppose the rushed feeling came partially from the fact that it's once again basketball tournament time at UCONN, and with that, there's always the possibility of sports programming preempting the various music programs on the airwaves at WHUS. Generally, if we start the BG Cafe a few minutes later than the scheduled 4PM, I'm fine with that. On Sunday, though, I was expecting a call from Michael Cleveland around 4:30, and once it got to be 4:25 and we hadn't started the BG Cafe yet...well, that kind of made me a bit nervous, I guess. In the end, everything worked out okay, but there were definitely a few anxious moments for me, anyway.

So, why were we waiting for Michael Cleveland to call? This award-winning fiddler (named SPBGMA's Fiddle Player of the Year for 2011, and an 8-time IBMA Fiddle Performer of the Year) is coming to Hamden, CT on March 19th, for one thing. If you like your BG music in a more traditional vein, you just can't do much better than Michael Cleveland & Flamekeeper. Flamekeeper -- the whole band has won the IBMA Instrumental Group of the Year for the last 4 years -- is tremendous with Mike on the fiddle (naturally), Jesse Brock on the mandolin, Tom Adams on the guitar, Marshall Wilborn on the bass, and now, Charlie Cushman has recently taken over the banjo spot vacated by Jessie Baker (who has gone on to join Doyle Lawson & Quicksilver). If it's not exciting enough that this great band is coming to CT, they're also releasing their second band recording on Rounder Records on March 29th. This CD -- appropriately titled, "Fired Up" -- promises to be a great one, and I can't wait for us to receive it at WHUS. This is just one likable band, so I hope you'll consider making the trip to Hamden on March 19th. 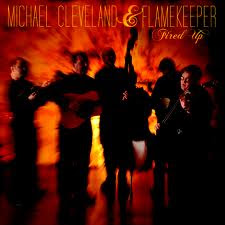 To learn more about the show in Hamden, visit http://www.guitartownct.com/. If you happen to miss that show, though, don't despair because you'll have quite a few opportunities to enjoy Michael Cleveland & Flamekeeper in the Northeast over the next few months. They'll be playing upcoming shows in Newburyport, MA, at the Lowell Folk Festival, the Jenny Brook Bluegrass Festival in VT, the Podunk Bluegrass Festival in East Hartford, the Pemi Valley Bluegrass Festival in Campton, NH, and at Greyfox, as well. If you'd like to learn more about Flamekeeper, visit the band's website: http://www.flamekeeperband.com/. Many thanks to the Hamden show promoter, Chris Wuerth of GuitarTown CT Productions, as he allowed us to give away a couple of single tickets to the March 19th show. Fun!

It was a day for new music, too, and we got to share quite a bit of it from new, only-received-on-Sunday Rounder projects from Steve Martin & the Steep Canyon Rangers ("Rare Bird Alert"), Larry Sparks ("Almost Home"), and Sierra Hull ("Daybreak"), as well as the self-titled Mountain Fever Records debut project for the Expedition Show, and Cedar Hill's recording on Blue Circle Records called, "I've Got A Thing About Doors." In addition, we played a single from a forthcoming solo project from Lou Reid & Carolina sideman, Shannon Slaughter, and newer music from the Grascals, Edgar Loudermilk, Charlie Sizemore, and the Gibson Brothers. 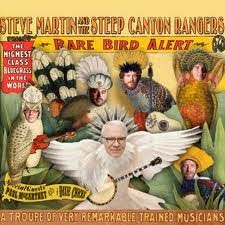 Now, a brief promotional word: our annual fundraising campaign known as Radiothon begins at WHUS on March 19th. Assuming there are no basketball preemptions, the two weeks of BG Cafe Radiothon will happen on March 20th and March 27th. We've been making arrangements to offer you some top-notch "thank you" music gifts this year -- in fact, we played tunes from some of those CDs we'll have to offer on Sunday's program. I know that WHUS has already sent out fundraising letters to those who've made a pledge in the past, and the "Powers That Be" would probably like you to make your pledge now before Radiothon officially begins. If you want to do that, go right ahead, but we'd really prefer if you waited to make a pledge until Radiothon actually begins. If you call us during the actual radio program, that's a good indication to us that you're enjoying the show, and you think it's worth your listening time. Over the past couple of years, you folks have made the BG Cafe the most listener-supported music program on the air at WHUS, and while we don't get any special awards or "bonus checks" (a joke -- Jim & I are volunteers at WHUS) if we attain that status again, we just love to have bragging rights to say how generous BG listeners really are! If you mail your pledge early, it's appreciated, but it doesn't get "credited" as support of the BG Cafe. We'll get you more Radiothon info very soon...and THANKS!!

Jim will join you this coming Sunday with lots more of the best in BG. Make plans to join him beginning at 4PM...

REQUESTS ARE RED.
Posted by Bluegrass Cafe at 9:58 PM