A remembrance and a tribute were the order of the day on Bluegrass Cafe.

First, a remembrance of Bill Ha 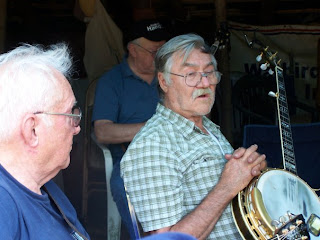 ll, the pioneering bluegrass band leader and banjo picker from Rhode Island who passed away April 20th following a mishap at his home. Bill first began playing in the 1950s, and over the years worked with The Lilly Brothers, Joe Val, and several of his own bands including The Bluegrass Travelers and Bill Hall and Northwind Bluegrass. Bill remained active in bluegrass right up to the time he left us. He was known for his weekly jams and an annual bluegrass Campa-Jamma-Ramma at his home. I played selections from his Northwind album titled "In The Shadow of the Pines" and both sides of a Rebel single of The Bluegrass Travelers. Most of the songs were written or co-written by Bill. 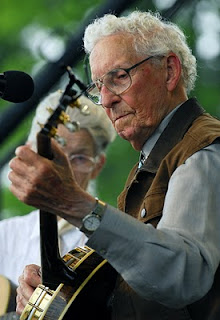 Later we celebrated the 103rd birthday of Wade Mainer, sometimes called "The Grandfather of Bluegrass" because the music he produced with his brother J.E. and many others in the 1930s and 1940s is considered an essential bridge between old time string band music and what became known as bluegrass music. Wade's two-finger banjo style is also a bridge between the old clawhammer style of picking and the now-standard three-finger bluegrass style. I played a series of recordings ranging from Wade's 1950s King sides to live performances from the early 1990s.

The remainder of the show included much new music, perhaps the newest being selections from Cherryholmes IV, and a new single from The Lonesome River Band.

Be sure to tune in next week when Amy will continue the tradition of making the banjos and fiddles ring.

Posted by Jim Beaver at 10:25 PM No comments: Links to this post 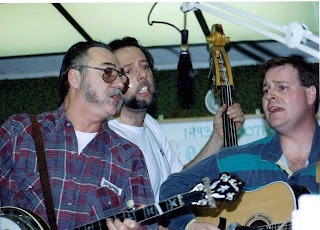 New England Bluegrass pioneer Bill Hall died Tuesday, April 20th at his home in North Scituate, RI. Known as a banjo picker and band leader of Bill Hall & Northwind for many years, Bill has also been recognized as one of the "Pioneers of Bluegrass" by the International Bluegrass Music Museum in Owensboro, KY.
You may view his obituary from the Providence Journal by clicking here.
This photo shows Bill in the studio at WHUS in 1993 back when Marcel Huguenin (aka the "Bluegrass Coyote") was hosting the program which was then known as The Magic Of Bluegrass. Obviously, Bill was the banjo player, and was joined by Harry Cook on bass and Earl Oliver on the guitar.
Condolences to the Hall Family from Bluegrass Cafe.
Posted by Bluegrass Cafe at 4:22 PM 1 comment: Links to this post

Sunday's BG Cafe featured a flurry of requests early on, and then, sort of slowed down to a more-relaxed pace. As Jim has mentioned in recent weeks, we have received LOTS of great new recordings from various labels and performers lately, and so, we try to squeeze in a good mixture of newer BG along with some of the classics of yesteryear that we always like to hear. Going for that exact balance of new and old can be challenging at times, but we hope you enjoy what we're playing on the ol' airwaves.

By the way, if you're keeping track of some of the newer stuff (released and/or received at WHUS within the past month or two) on this week's playlist, here's a quick snapshot: Darren Beachley & Legends Of The Potomac, Audie Blaylock & Redline, Summertown Road, Lorraine Jordan & Carolina Road, Sweet Potato Pie, the Grascals, Doyle Lawson & Quicksilver, and Connecticut musician Nathan Day.

As you may have heard, the Pulitzer Prize Board awarded a posthumous citation last week to the legendary Hank Williams. During his short lifetime, Hank was pretty much recognized as a performer and writer of country music, but his many great songs have lived on to touch and influence so many more genres of music. In awarding the citation, the Pulitzer Board praised Hank Williams for "his craftsmanship as a songwriter who expressed universal feelings with poignant simplicity and played a pivotal role in transforming country music into a major musical and cultural force in American life." Several months ago, we paid tribute to Hank by playing a set of his tunes which have been covered by various BG performers. However, with this new Pulitzer recognition, it seemed appropriate to string together a few more of Hank's many great tunes -- some covers by BG performers and even a couple from Hank himself. Even 57 years after his death, the music of Hank Williams lives on...and will likely continue to do so for many, many years to come.

Jim will join you in the studio for this coming Sunday's BG Cafe. Be sure to tune in, as I'm sure you're going to hear something you'll like a whole lot...

Enjoy the rest of the week -
Amy

Posted by Bluegrass Cafe at 12:42 PM No comments: Links to this post

This was another fun day of mostly new or newer music. It is interesting that many of the requests lately have been for the newer releases. There is a savvy bunch of listeners out there.

It is also interesting that I haven't had to raid the Heritage Corner archives much lately because many of the heritage tunes have been newly released by labels such as Rural Rhythm and Gusto making them accessible to everyone, and making it easy to find great foundations to put on the air. 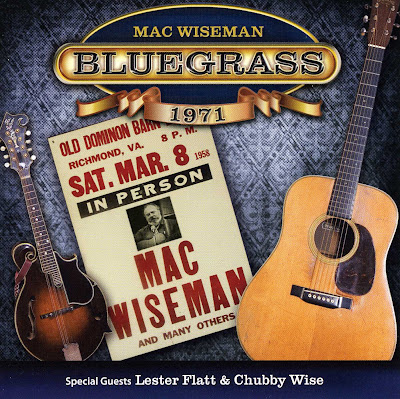 ge tunes we played came from two new releases from Rural Rhythm: Mac Wiseman - Bluegrass 1971, and Reno & Smiley - Bluegrass 1963. The Wiseman release is mostly a live festival performance that included Lester Flatt and the Nashville Grass along with the Shenandoah Valley Cut-Ups. The Reno & Smiley release is a transcription of a television show that included a visit by the Stanley Brothers. While the sound quality is not up to current standards, this is priceless history that has been preserved for us.

There are so many new releases that Amy and I could make a series of shows consisting of traditional bluegrass music never played on Bluegrass Cafe before. That's a great situation for bluegrass lovers everywhere, but because our show is only three hours long, we don't get everything we would like to play on the air each week. That's a good reason to tune in every week!

Amy will be with you next week, so tune in from 4 to 7 pm ET when she will make the banjos and fiddles ring.