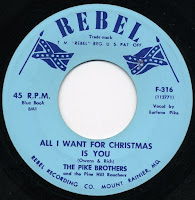 If you were able to tune in for our Christmas show on Christmas Day, we hope you enjoyed our 100% Christmas selections.

Posted by Jim Beaver at 9:15 PM No comments:

Many folks produce "best of" lists at the end of the year, and there seems to be a lot of overlap in music, especially when so many of the evaluators draw from the same well.

I've made it a goal in my musical endeavors to dig deeper and unearth jewels that might have been overlooked, and I enjoy presenting those recordings, both new and classic, on various radio programs that I produce at WHUS.

The following list, in no particular order, represents my opinion of some of the best new bluegrass albums to be released in 2016 outside of the mainstream.  I encourage you to seek them out. 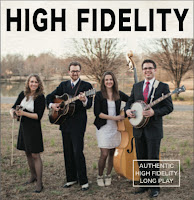 This album is a real sleeper.  I might never have heard of it except for an internet tip, and I am forever grateful to have found it.  Jeremy Stephens (guitar), Corrina Rose Logston (fiddle), Kurt Stephenson (banjo), Vickie Vaughn (bass), and Daniel Amick (mandolin) combine to create real bluegrass as it existed in the exciting early years of the genre.  About half the songs are gospel, and all the songs are as true to the early vision as possible.  Jeremy is a well-known multi-instrumentalist known for his excellent Reno banjo picking and his guitar picking with the famous Chuck Wagon Gang.  He picks guitar on this album and recently announced his departure from the CWG to spend more time on this kind of project.  Corrina is a superb young fiddler, and Kurt is amazing on the five.  I can't wait to see what they do next. 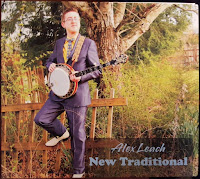 Of all the young folks getting into bluegrass in recent history, very few have an authentic mountain sound like Alex Leach.  His album "Mountain Heartache" from a few years back was one of the best of that year, as is his follow on this year.  Alex is the regular banjo picker with Ralph Stanley II and the Clinch Mountain Boys and continues to host a very popular traditional bluegrass radio show on WDVX on Tuesday evenings.  The sounds of East Tennessee and the surrounding areas of North Carolina and Virginia are dominant here, and if you like it traditional and deep catalog, you'll love this. 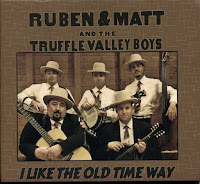 As a follow up to last year's surprisingly great first release, this international band with roots in Italy has a love affair with the early bluegrass of the late 1940s and early 1950s, and seeks to recreate that sound in all its single mic texture and with what sounds like the technology of the time in its simplicity.  The music is just as fresh as it was in those early days, and it has all the tell-tale human elements that demonstrate this is the real thing.  All the singing is in English and only occasionally can you even detect an accent. This group has done some incredible research and woodshedding to pull this off, and they succeed. 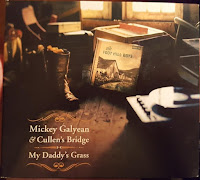 This one is more mainstream than Mickey's last album thanks to the insight of the Freemans at Rebel Records.  For those new to this band, Mickey is the son of regional bluegrass hero Cullen Galyean from Surry County, North Carolina.  Cullen won the banjo competition at the first bluegrass festival at Fincastle, and made many pioneering recordings with Folkways and County.  Mickey got into bluegrass in a powerful way several years back when he helped release a tribute album of his dad's music, and then an album with Rich In Tradition.  This is Mickey's second release with his own band, Cullen's Bridge, and it is a great representation of original and classic traditional music from Surry and surrounding areas. 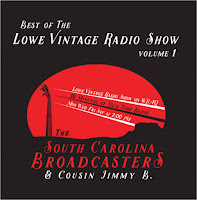 In the interest of full disclosure, I am "Cousin Jimmy B" and was the producer and announcer of the 15-minute 4-times-a-week radio show that aired on WPAQ Mount Airy NC for 15 months between 2015 and 2016 featuring the South Carolina Broadcasters.  I signed on because I believe this group has something wonderful and original to offer folks who are starving for new sounds that are unmistakably traditional.  The trio of Ivy Sheppard, David Sheppard, and Andy Edmonds, all from Surry County NC, have roots in old-time and bluegrass traditions, and the music they write and perform reminds the listener of both without actually being full-out either.  They are all multi-instrumentalists and their three-part vocal harmonies are out-of-this-world.  World-renowned 78 record collector Joe Bussard makes a rare musical appearance on this recording.  Their 2015 release "Tell Me Truly" was a more cohesive effort than this radio transcription, and the upcoming album from the group promises to be amazing, so this one will have to do until then. 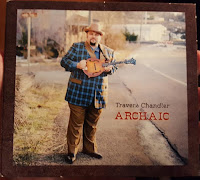 It's hard to know what Travers is up to at any given time whether making music with his now-defunct band Avery County, to his newest endeavor with former Bluegrass Brother Steve Dowdy, or writing his Charlie Moore biography, or driving a big rig around the country, but it is clear that Travers knows what blue collar bar room bluegrass that incubated in the Baltimore and Washington DC area in the 1950s and 1960s is all about, and he obviously seeks to keep it going.  His mandolin picking is powerful with all the tremolo one would expect from an old Buzz Busby record, and his singing is raw and emotive.  This CD is really what might be the last Avery County album before Travers' next project, and its mix of honky-tonk country and bar room bluegrass makes it nearly unique in modern bluegrass. 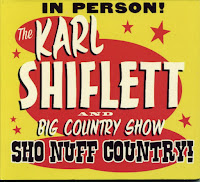 Karl has been making bluegrass in this configuation (albeit with lots of personnel changes) for over 23 years, and this latest effort is a fantastic collection of honky-tonk, western swing, and early sounding bluegrass.  Tom Mindte over at Patuxent Records may be the only producer giving voice to music like this today, and thank goodness we have him and his label.  Karl's band is one of the best ever, with the dynamo combination of Brennen Ernst on banjo and guitar, Billy Hurt, Jr., on fiddle, Justin Harrison on mandolin, and Kris Shiflett on bass.  Of course Karl is the man out front on guitar and lead vocals.  As a DJ, I love records like this that I can pop in the player and hit any track for a great experience.

The Po' Ramblin' Boys - Back To The Mountains - Randm Records 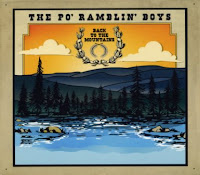 This group emerged in 2016 with a great debut CD on Randm Records, a label with only a couple of bluegrass acts. The group consists of C.J. Lewandowski (Vocals, Mandolin), Jereme Brown (Vocals, Banjo), Josh ‘Jug’ Rinkel (Vocals, Guitar) and Jasper Lorentzen (Bass).  C.J. comes from the Missouri bluegrass tradition and spent time with Karl Shiflett and James King before starting this group.  Jereme is the son of mountain style bluegrass man Tommy Brown from Kentucky and still performs with his dad as well as this band, so even as a young band they are quite experienced in the tradition. They play great originals and covers, and are worth checking out live and on CD.

*********
Since my collection is less than orgainized at the moment, I may come back and add more later.

Jim Beaver
Posted by Jim Beaver at 10:53 PM No comments:

With just one week to go before Christmas Day, it seemed quite appropriate to 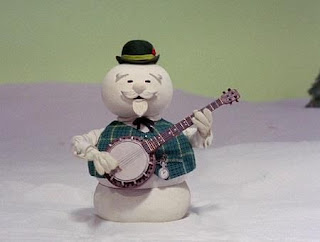 play mostly Christmas music on Sunday's Bluegrass Cafe.  Not only did we include some newer and older Christmas tunes from a bunch of your favorite (we hope!) performers, but we also snuck in a few Christmas songs from some classic Country Music performers.  Hope you enjoyed the mix!

While the majority of the music heard on Sunday's show was Christmas-themed, there was also an eight-song interlude of songs found on some of our favorite Bluegrass releases of 2016.  Among these were favorite 2016 selections from several performers, including Lou Reid & Carolina, Rhonda Vincent & the Rage, Corrina Rose Logston, the Earls Of Leicester, Junior Sisk & Ramblers Choice, Travers Chandler, Balsam Range, and Karl Shiflett & Big Country Show.  This was my last broadcast of 2016, but during the January 1st edition of Bluegrass Cafe, we'll share more favorites from 2016, I'm sure.

Join Jim for the Christmas Day broadcast next Sunday, as it is certain to be a dandy!

Warm wishes to you all for a very Merry Christmas, and I will look for you again on January 1, 2017!

Two of our three hours were preempted Sunday, but we were able to bring a packed hour of music to our listeners, including our traditional bluegrass gospel set, with the able assistance of Cathy Day and Keegan.  Both Cathy and Keegan are soon-to-be regulars on Bluegrass Cafe.

Cathy and Keegan pretty much programmed the rest of the show. You can check out the playlist below.

Join Amy next week for more great bluegrass music as she makes the banjos and fiddles ring.