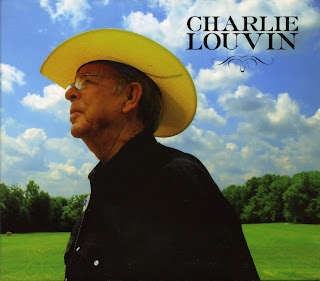 Marti and I had an extra hour in front of the regular Bluegrass Cafe show, so we used that hour to present a retrospective of Louvin Brothers music and to demonstrate unequivocally why the loss of Charlie Louvin on 26 January was the end of an era.

Charlie was recording right up until he passed away - his most recent album was released November 2010 and that was the second album he released that year. (The picture above is from his 2007 release on the Tompkins Square label.) 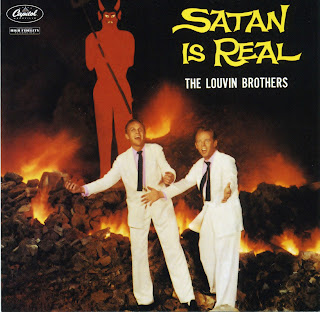 the brother harmony tradition that had existed earlier in roots music (think Delmore Brothers, Sam & Kirk McGee, The Monroe Brothers) and elevated it to new heights. When you listen to their contemporaries like the Everly Brothers, it is clear that the Louvins had a significant influence on country and pop harmonies that is continuing. The brother harmony tradition continues in bluegrass today with the top proponents being Dailey & Vincent (in style) and The Gibson Brothers (in reality).

And who can forget the iconic cover of their 1960 album, "Satan Is Real" 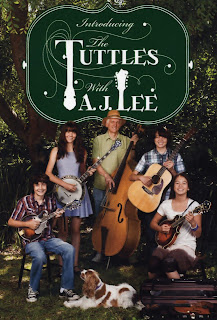 New music included our debut of songs from a very talented California family, The Tuttles with A.J. Lee. We also are enjoying playing the latest releases from Travers Chandler & Avery County, Taylor's Grove, Jimmy Gaudreau, and The Roys.

Be sure to tune in next Sunday at 4pm ET when Amy will make the banjos and fiddles ring.

The items in blue are the Louvin Retrospective. Items in red are requests.

Posted by Jim Beaver at 9:53 PM No comments:

With it being ridiculously cold outside, we tried to start off Sunday's show playing a couple of tunes with a "warmer" theme. It may be only 8 weeks until the calendar tells us it's Spring (and fewer than that 'til the Red Sox- and other baseball teams - begin Spring Training!), but for now, I think there are a whole lot of folks in New England who are just plain old SICK OF WINTER. Blech. Trying to warm things up with some music isn't horrible, right? 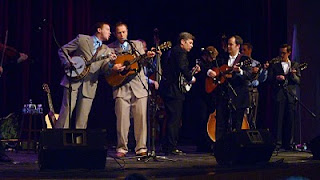 Last Sunday, while Jim was interviewing the likes of Kristin Scott Benson,Valerie Smith, and Becky Buller, I was in Bellows Falls, VT enjoying the second of two "Brothers" shows featuring the Gibson Brothers and the Spinney Brothers. Needless to say, both the Vermont show and the show the previous night in Lexington, MA were quite fabulous with generous helpings of humor and fun, and a whole lot of superb brother harmonies. Congratulations to the sponsors of this mini-tour: the Boston Bluegrass Union, as well as Candi & Seth Sawyer (promoters of the Jenny Brook Bluegrass Festival). Hopefully, this idea of combining these two brother acts will be picked up by additional promoters another time...

This week on the radio, we tried to play a bit of new (or newer) music, and I think we succeeded with music from the Gibson Brothers' mandolin player, Joe Walsh, as well as banjo picker, Ross Nickerson, and Dobro player, Glenn Gibson. In addition, there is a terrific new BG gospel recording from Joe Mullins & the Radio Ramblers, who will be performing at next month's 26th annual Joe Val Bluegrass Festival in Framingham, MA. There was also music from Edgar Loudermilk and Valerie Smith, and one tune from the highly-anticipated forthcoming Rounder Records recording from the new "Ambassador of Bluegrass," Steve Martin along with the Steep Canyon Rangers. Great stuff -- all of it. 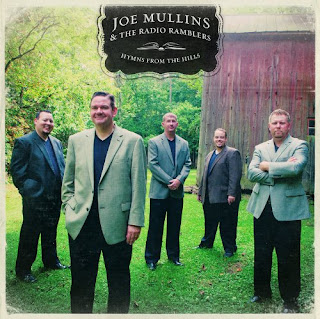 In my ongoing efforts to highlight some traditional country music performers that I really like -- and who are obviously also enjoyed by many BG performers -- I tried to put a bit of a spotlight on two Country Music Hall of Famers who celebrated birthdays in January: Ray Price (born January 12, 1926) and Dolly Parton (born January 19, 1946). While Dolly has made a few BG-based recordings, I don't believe the Cherokee Cowboy ever has; however, many tunes from his great songbook have been recorded in a BG style through the years. We played 8 tunes originally recorded by Ray and Dolly, and even threw in a Ray Price tune from 1955 which may have included the one-and-only Earl Scruggs playing the banjo. A bit more research on that particular fact may be in order...

Hope you enjoyed something you heard on Sunday, and I'm sure you'll enjoy whatever Jim has in store for this coming Sunday's show. Join him beginning at 4PM, and try to stay warm!

Posted by Bluegrass Cafe at 9:47 PM No comments:

Bluegrass Cafe was pretty special this week since Marti and I had three very accomplished bluegrass women pay us a visit. 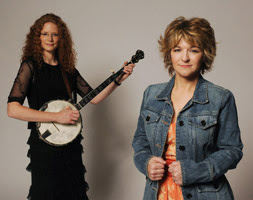 Valerie Smith and Becky Buller joined us first and brought us up to date on their new project, "Blame It On The Bluegrass," which has the distinction of being the first album ever recorded in the International Bluegrass Music Museum in Owensboro, Kentucky. This 6-song EP (Valerie calls it a "six-pack") contains some energetic music, two songs of which were written or co-written by super-songwriter, Becky (including the title song). Besides the information from our previous blog entry, you can view a video of the making of the album here --> Making of Blame It On The Bluegrass 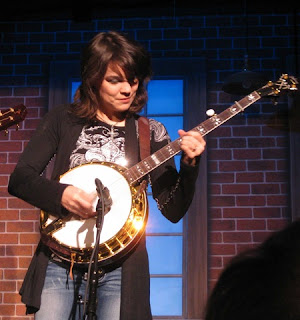 Next was a visit from current and three-time IBMA Banjo Player of the Year, Kristin Scott Benson of The Grascals. Kristin delighted us with her musical history (she is related to Arval Hogan - pioneering musician of the duo Whitey & Hogan, and The Briarhoppers - and named her son Hogan after him), and told us about The Grascals' new CD on the Cracker Barrel label -- The Grascals & Friends - This new CD, only available at Cracker Barrel stores or at Cracker Barrel on line, pairs the group with many famous country artists such as Dierks Bentley, Tom T. Hall, and Charlie Daniels. Accordingly, the music has more elements of country than previous Grascals albums, but there is still plenty of Grascals-style bluegrass in the songs. A feature of the new album is a song written by Grascals singer Jamie Johnson titled "I Am Strong" inspired by St. Jude's Children's Hospital. Dolly Parton performed the song with the Grascals. You can see the video here --> "I Am Strong"

We played an entire 15-min 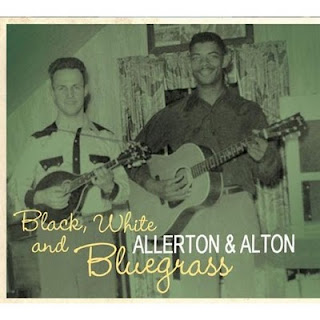 ute radio show from the 1950s by "Allerton & Alton," the Cumberland Ridge Runners, who were actually Maine bluegrass legend Al Hawkes and his partner Al Myers. The unusual part of this duo was that Al Myers happened to be black. This was such an unusual arrangement for the time that Bear Family has seen fit to release a CD with many of the old Allerton & Alton radio performances titled "Black, White and Bluegrass." We just obtained the CD and it was an interesting coincidence that we played this set of music on the Martin Luther King holiday weekend. 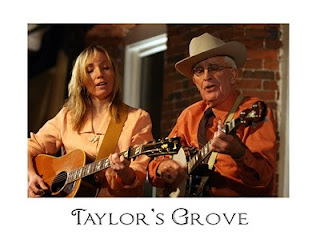 Amy will be with you next week making the banjos and fiddles ring, so be sure to ask her about the great brother duet concerts with the Gibsons and the Spinneys in Massachusetts and Vermont when you get a chance. 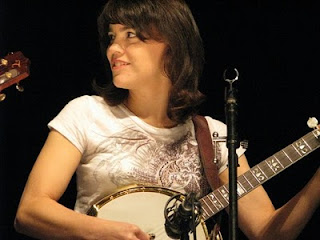 We have the honor of having telephone visits with Kristin Scott Benson, three-time consecutive IBMA banjo player of the year and member of the Grascals, and Valerie Smith and Becky Buller, members of Valerie Smith and Liberty Pike. Both have new CDs that were just released this week, and we will talk about those as well as more personal aspects of their careers. 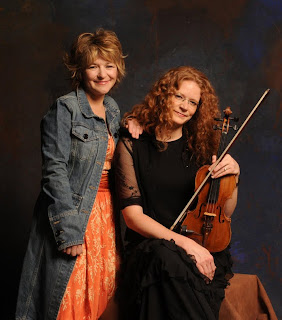 Video: Making of "Blame It On The Bluegrass" 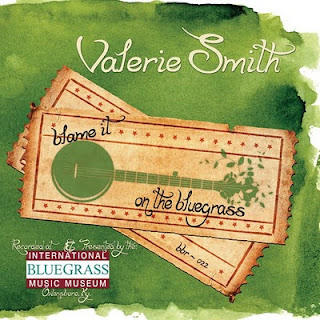 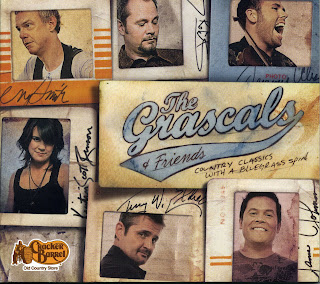 
For the video of "I Am Strong," click on the picture below: 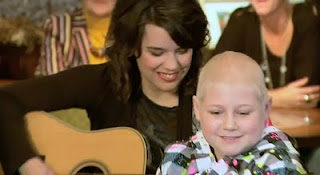