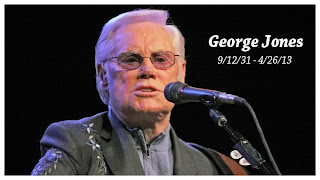 Another great musical presence left us April 26.  George Jones, 81, died leaving us to consider the legacy he left behind.  To many he was considered to be the greatest country music vocalist of all time.

We devoted a good portion of the show to the music of George Jones, and warmed up with some of his songs recorded by bluegrass artists Russell Moore & Sonya Isaacs, The Stanley Brothers, and Bob & Danny Paisley.  The Grascals introduced George himself with the recitation from "Don't Tell Mama" from their second album.  George represented himself for the remaining songs in his tribute.

George Jones funeral was a two-and-a-half hour affair at the Grand Ole Opry House open to the public on Thursday, May 2, and was a fitting tribute to this giant of a singer whose body of work could be considered the definition of real country music.

For a reading recommendation besides George Jones' autobiography released in 1996, there is a very enjoyable book released in 2011 about the making of the greatest country record of all time, "He Stopped Loving Her Today," written by Jack Isenhour.  It is one of the few books that focuses more on the music than the personalities, although there is a good dose of each in the process of telling the story. 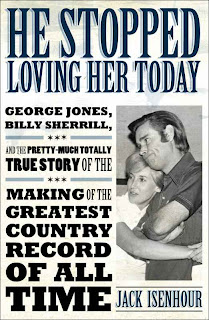 Elsewhere in the show we introduced a few tracks from the excellent new CD from Mickey Galyean and Cullen's Bridge, and other new songs from The Gibson Brothers, Dailey & Vincent, Feller & Hill, The Boxcars, Doyle Lawson & Quicksilver, Marty Raybon, Dale Pyatt, The Daughters of Bluegrass, Scott Brannon, Emily Kirsch, and Mountain Faith.

We also had local Nashville transplant Monty McClanahan in the studio providing information about an upcoming performance of The Kropp Dusters, a group made up of past members of Northern Lights as well as Monty.  Of course we played some of Monty's songs (with the late Randy Howard on fiddle) and a Northern Lights song to get in the mood.

Thanks for listening.  Be sure to tune in next Sunday when Amy will make the banjos and fiddles ring.