If you were at home instead of the Joe Val Bluegrass Festival, perhaps you were surprised to tune in to Bluegrass Cafe (an hour later than usual because of sports) and hear a voice from the past.  Indeed, former BG Cafe DJ Jim Beaver (that's me) moved to Mount Airy, North Carolina several months back, but happened to be in town working on selling the old house and was available to step up to the microphone while Amy and Cathy were at Joe Val. 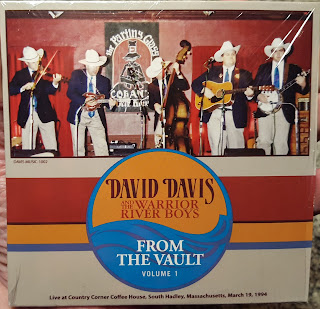 Since my record collection is in Mount Airy now, the bulk of the music I played was limited to record acquisitions I've made in the weeks I've been in Connecticut working on the old house, plus whatever was in the studio. If you noticed the classic and obscure bluegrass music, that is the reason.  That, plus I like it.

Of note was the performance by David Davis and the Warrior River Boys Live at Country Corner Coffee House in South Hadley, Massachusetts from March 19, 1994 now available on CD from David Davis himself.

Also there was quite a bit of vinyl on LP and 45 singles including recordings from Bill Berry and Paul Chaney: Jim McCall & Bennie Birchfield, Albert Parsley & Landon Messer; Dub Crouch and Norman Ford; Hack Johnson with Allen Shelton; Bill Box, and The Pinnacle Boys.

The playlist is below.