Our standard playlist "recipe" for the BG Cafe is a mix of old with new.  When we use the term "old," though, we don't always mean going back to music from the first generation and the 1940s and 1950s.  In doing a bit of cleaning at home, I recently unearthed a couple of cassettes from around 1989/1990, and since neither of these tapes had ever been issued on LP or CD (to my knowledge, anyway), I couldn't resist the opportunity to share them on the airwaves on Sunday.  The sound quality is definitely lacking, but we like to think that mixture is all part of the "charm" of a live radio show.  Let's go with that reasoning, anyway... 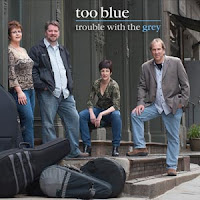 Under the "new" category, we shared music from two super CDs:  one from a NYC-area band called Too Blue, and the other a soon-to-be released project from the trio of Freeman & Williams.  It so happens that Too Blue was performing today at the Firebox Restaurant in Hartford, so perhaps folks listening to the radio on their way to the Firebox got to hear some great music from their CD called, "Trouble With The Grey."  It's a mighty fine record. 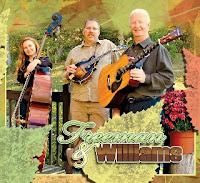 The Freeman & Williams trio is North Carolina musician Scott Freeman, joined by Virginia BG veterans, Johnny & Jeanette Williams.  Their new self-titled project will be released on February 7th on Mountain Roads Recordings, and it is quite delightful.  Doubtless, you'll be hearing more from this talented trio, as well as Too Blue, in future editions of the BG Cafe.

For the "old," we returned to the 1990 Winterhawk Bluegrass Festival in Ancramdale, NY with the "3rd Winterhawk Scholarship Album."  There are several great live performances on this tape, and they run the gamut from traditional BG to the more "out there," fringy styles of acoustic music.  That's kind of the brand for Winterhawk (now known as Grey Fox) -- the festival is neither fully a traditional festival nor a completely "jamgrass" festival.  There's really something there for every BG musical taste, and this tape really showcased that.

We also revisited some of the first recorded music from a Canadian band then known as the Spinney Brothers & Close Company.  The Spinneys have come a long way since their earliest musical days, but it's fun to hear how they sounded on their first two recordings from 1993 and 1996.  We'll be sharing a brand new recording from the Spinney Brothers sometime in the next couple of months, when they make their debut on Mountain Fever Records with a CD called, "Memories."

Hope you enjoyed something you heard on today's show, and that you'll be sure to join me once again next Sunday on the BG Cafe.

Requests are RED.
Posted by Bluegrass Cafe at 11:26 PM