There were no big winds or driving rain for this holiday weekend (so far, at least), so I had no problems getting to WHUS for another edition of the "Bluegrass Cafe."  We ended up staying an additional 30 minutes, as Susan Forbes Hansen's "Sunday Night Folk Festival" was preempted for a UCONN Men's Soccer game.
The show began with a bit of music appropriate for a Labor Day weekend -- the common theme, of course, was the Working Man (and Working Woman). 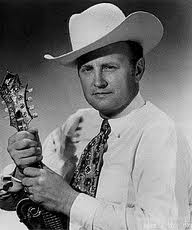 If you follow BG at all, you're well aware that September 13, 2011 is the 100th birth anniversary of the Father of Bluegrass Music, Bill Monroe.  Many record labels have put together special collections of Monroe's music throughout this centennial year, and it has been quite enjoyable listening to a good lot of them.  As I'm not sure if I'll be hosting another "BG Cafe" before Monroe's official birthday, I thought it might be somewhat enjoyable to play a bit of Monroe's music, both performed by him, as well as others.  I devoted the entire gospel set to Bill Monroe gospel tunes, and while I will admit that a good number of them seem to share very similar melodies, I still enjoyed them a good bit.  Hope you did, too.  There's no doubt in my mind that Bill Monroe's music will continue to be played and enjoyed for as long as folks still listen to and play Bluegrass music...and that's as it should be.
September isn't just the birthday month for Bill Monroe, though.  Jimmie Rodgers, the man known as the Father of Country Music, America's Blue Yodeler, the Singing Brakeman, and perhaps another nickname or two, was born on September 8, 1897.  Plenty of Jimmie Rodgers tunes have been covered in the BG world through the years, including a song or two recorded by Bill Monroe.  One of those Jimmie Rodgers tunes reportedly got Monroe a job on the Grand Ole Opry in October 1939:  the "Mule Skinner Blues."

While we didn't concentrate too much on new music this week, we did include a couple of tunes from a forthcoming gospel project by David Parmley & Continental Divide called "Church House Hymns, Volume II."  Even though David had announced his retirement from the music business previously, it's good to have him back recording, and he's sounding as good as ever.
Hope you all enjoy the remaining time in the "last unofficial week of summer."
Amy