Weather-wise, Sunday was kind of a gloomy day in Storrs, CT. It's definitely a quiet campus with most of the students gone, but we still like to keep the "festive" atmosphere on the airwaves. Do we always succeed? Perhaps not, but I think Sunday's show was a good one (even if I might be slightly biased)... The show began with a brief tribute to a true BG icon: Lester Raymond Flatt. This past week was the 32nd anniversary of Lester's passing at the relatively young age of 64 (May 11, 1979). What a legacy he's left us...even after all these years. We could easily fill several shows with just versions of the tunes that were written or co-written by Lester Flatt -- and we may get to some of those as we get closer to the anniversary of Flatt's birth (June 19, 1914). 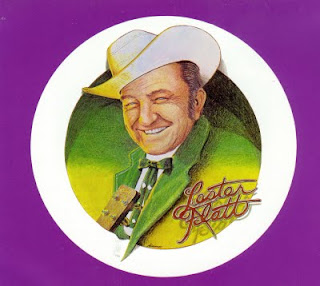 This week also included birthdays for two country singers who, though not considered a "Bluegrass act," are still close enough to the BG world for me. Johnnie Wright (born May 13, 1914) and his musical partner -- and brother-in-law -- Jack Anglin (born May 13, 1916) made some great records in the 1940s and 1950s -- many of which have been recorded by BG performers through the years. If that's not enough of a BG connection, the great fiddler Paul Warren (who would work with Flatt & Scruggs for many years), also played with Johnnie & Jack & the Tennessee Mountain Boys for several years throughout the late 1940s and early 1950s (see photo below, taken in 1953). We didn't have time to play too many Johnnie & Jack tunes in today's show, but we were able to squeeze four tunes into two, thanks to the Country Gentlemen's "Johnny & Jack Medley." 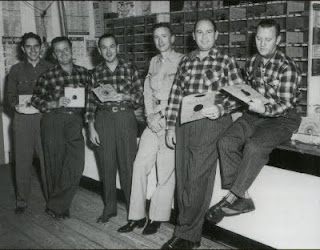 Our spotlight shone a bit today on bass player Edgar Loudermilk. Edgar currently works (very happily) with Russell Moore & IIIrd Tyme Out, but he has a really terrific solo recording out these days, as well. We were able to visit with Edgar for a few minutes about the solo recording ("Roads Travelled" on Mountain Fever Records) -- a project featuring twelve tunes he either wrote or co-wrote which was about 7 years in the making. With guests like Edgar's former and current employers (Marty Raybon, Rhonda Vincent, Russell Moore), how could the CD be bad, right? After our chat, we were able to give away copies of the CD to two listeners, so giving things away is always fun. For more information on Edgar Loudermilk, you can visit his website by clicking here, or, of course, visit with him and the rest of Russell Moore & IIIrd Tyme Out when they play at the upcoming Strawberry Park Bluegrass Festival in Preston, CT on June 3rd. 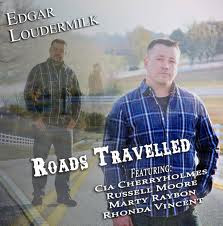 Hope you enjoyed something you heard during today's show, and do be sure to tune into the BG Cafe next Sunday with Jim. You'll be glad you did...

Posted by Bluegrass Cafe at 8:47 PM