Summer is supposed to be one of those "carefree," laid-back seasons when folks think about vacations and relaxing and the like. On Sunday, we spent a total of five hours in the BG Cafe as the hosts of our 2-4PM show on WHUS this summer were away. That meant two "bonus" hours for BG (or music somewhat similar to BG), and since I had been away from the airwaves for a couple of weeks doing my own "carefree" sorts of things...well, I was ready to jump back in for a 5-hour session.
In the early hours, I thought it might be fun to put a bit of a focus on brother duets. From the earliest days of country music, brother acts have been singing harmony, and there's no doubt that the influence of many of these great acts, including the Delmore Brothers, the Blue Sky Boys, and, of course, the Monroe Brothers continues to impact actual brother (and brother-style) duets today. While the period of the late 1930s is considered by some country music historians to be the "heyday" of brother duets, today's Bluegrass music includes several actual brother duets with last names of Gibson, Spinney, and Crowe who are making some GREAT records, as well as a pretty decent act who claim to be "brothers from different mothers," Dailey & Vincent. There's just something incredibly appealing about the simplicity of two similar-sounding voices blending together to form one larger sound.
And you know that we just couldn't feature brother duets without playing music from the great Louvin Brothers. For my money, there just wasn't a country brother duet who could sing (or write) better than Ira & Charlie. These two brothers may have been total opposites, but when they sang...magic. And since Charlie celebrated his 83rd birthday on July 7th, why not pay tribute with lots of great Louvin music, sung by both the Louvins and other performers who sang their tunes, such as Jim & Jesse, the Browns, and Johnnie & Jack?
Here are a couple of books to add to your "reading list" if you'd like to learn more about either the Louvin Brothers, or their idols, the Delmore Brothers. Alton Delmore began a memoir that he never completed before his death in 1964, but the manuscript was found and originally published by the Country Music Foundation Press in 1977 with the title of The Delmore Brothers: Truth Is Stranger Than Publicity. The work is important, as very few first-hand accounts exist about country music performers in the days before World War II. The Louvin biography is also a very readable discography called Close Harmony: The Story Of The Louvin Brothers (Univ. Press of Mississippi, 1996). It's probably no coincidence that the author of the Louvin book and the editor of the Delmore book are the same person: Charles K. Wolfe, the noted country music historian who died in 2006. Neither book appears to be available in any library in Connecticut, but both books are available through numerous online retailers. Do make an effort to read them if you can. 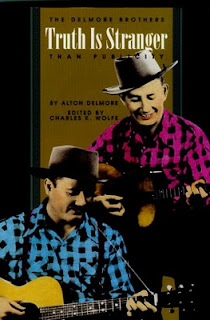 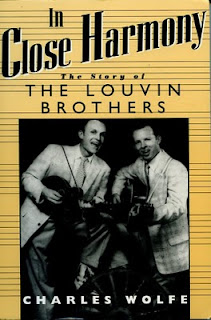 As for the rest of the BG Cafe, we shared a bit of newer music from the likes of the Darrell Webb Band, the Lonesome River Band, fiddler Tim Martin, Junior Sisk & Ramblers Choice, and the Infamous Stringdusters. Thanks to Mountain Home Records, we got to give away a copy of the fine Jimmy Martin gospel tribute recording from a trio of former Sunny Mountain Boys: J.D. Crowe, Doyle Lawson, and Paul Williams. And if that wasn't enough, we also had a one-day pass to the upcoming Podunk Bluegrass Festival in East Hartford. Thanks to everyone who called in with a request, to win one of our prizes, or to just say hello. We love to know you're out there!
I'll join you again this Sunday from 4-7PM. Hope you can tune in!
Stay cool -
Amy
REQUESTS ARE RED.